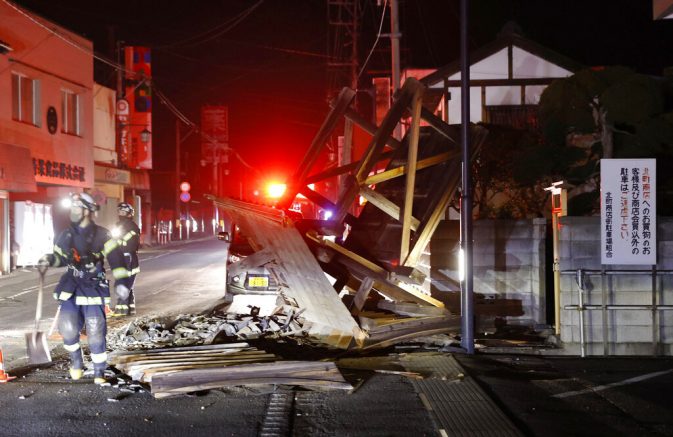 A structure falls due to an earthquake in Koorimachi, Fukushima prefecture, northeastern Japan early Sunday, Feb. 14, 2021. A strong earthquake hit off the coast of northeastern Japan late Saturday, shaking Fukushima, Miyagi and other areas, but there was no threat of a tsunami, officials said. (Jun HIrata/Kyodo News via AP)

An earthquake jolted the Fukushima region of Japan, which caused a blackout for more than one million households. Many people were injured due to the quake, but Japanese Prime Minister Yoshihide Suga said no deaths have been reported.

Japan’s meteorological service said the earthquake presented no danger of a tsunami, but it caused water cut outs and the suspension of rail services.

“I have lived in Japan for nearly 10 years and I have experienced many earthquakes, none of which felt as strong as the one on Saturday,” recounted local resident Deng Yanyang. “I think it was the strongest earthquake in 10 years.”

According to Tokyo Electric Power Company Holdings, water in a nuclear fuel pool spilled over, but did not leak in the Fukushima Daiichi Nuclear Power Plant.

This was the same power plant, which suffered a nuclear meltdown after the magnitude nine earthquake and tsunami that devastated the same region in 2011. The most recent earthquake occurred right before the 10 year mark of that disaster, which left 28,000 people dead or missing.