Comedian and TV host Jon Stewart said during a podcast with Dallas Mavericks owner Mark Cuban that playing the National Anthem before games is a “weird ritual,” appearing to criticize the American tradition of standing as the song is played before sporting events.

Stewart shared the comments during his podcast “The Problem with Jon Stewart” released on Thursday.

“Does anyone know when that started, playing the national anthem before games? It’s such a weird ritual,” Stewart said.

“I’ve always thought about when Kaepernick took the knee and the whole thing was like, ‘You gotta stand for the anthem!’ Now I imagine like in living rooms, guys are getting nachos ready, and f***ing the wings, and the anthem comes on and they all just have to [stand].”

Stewart also questioned the difference between people at a live sporting event being expected to stand, though viewers at home are not generally expected to do so.

“But like why is that? When the anthem comes on, you only have to stand if you’re there. But the transitive principle through the television, if it’s through the television you can do whatever the f*** you want. You can take a s*** during the National Anthem as a patriot. But if you’re at the stadium there’s like a whole regimen you have to go through.”

It’s not the first time Stewart has caused controversy over his recent remarks. The comedian, who is Jewish, recently claimed the goblin characters who run Gringott’s Bank in J.K. Rowling’s Harry Potter books are meant to be stand-ins for Jews. The Daily Wire recently reported:

“Here’s how you know Jews are still where they are,” he said on his Apple TV+ show last month. “Talking to people, I say: ‘You ever see a Harry Potter movie?’ And people are like, ‘I love the Harry Potter movies!’ And I’m like, ‘You ever see the scenes in Gringotts Bank?’ And they’re like, ‘I love the scenes in Gringott’s Bank!’ And I go, ‘Do you know what those folks who run the bank are?’ And they’re like, ‘What?’ And I’m like, ‘Jews!’”

And I’ll say, ‘Let me show you this from the Protocols of the Elders of Zion. I just want to show you a caricature.’ And they go, ‘Oh, look at that, that’s from Harry Potter!’ And you’re like, ‘No, that’s a caricature of a Jew from an anti-Semitic piece of literature.’ J.K. Rowling was like, ‘Can we get these guys to run our bank?’ … It’s a wizarding world … we can ride dragons, you can have a pet owl … but who should run the bank? Jews, … but what if the teeth were sharper?”

It was one of those things where I saw it on the screen and I was expecting the crowd to be like, ‘Holy sh**, she did not, in a wizarding world, just throw Jews in there to run the f***ing underground bank. And everybody was just like, ‘Wizards.’ It was so weird. 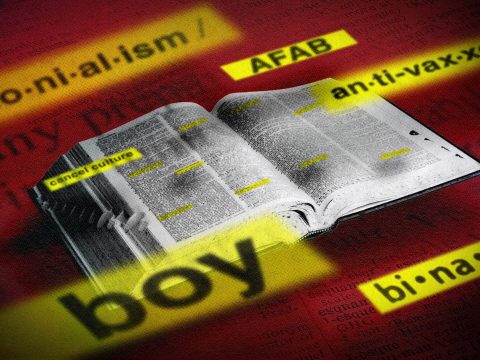 0 86
Newspeak: How Merriam-Webster Is Redefining Words To Fit A Leftist Agenda

0 28
Biden’s Sister: He Will “Absolutely” Run For Re-Election