“Real Housewives of Dubai” star Chanel Ayan recalled in therapy the terrifying childhood trauma she experienced as she and her sister were tied together as they “were circumcised.”

During a hypnotherapy session on the hit reality show this week, Ayan broke down while talking about the forced female genital mutilation she said was done to her and her older sister which her mother didn’t know about, the “Today” show reported in a recent piece.

“At 5 years old, my aunt and my grandma came to pick us up to take us to another town,” Chanel told the therapist. “And then the next morning at 6 a.m., I didn’t know where I was going whatsoever. Then they took us to this man’s house and they just tied us on the bed and we were circumcised.”

“We were tied in the legs,” she added. “Couldn’t pee. Couldn’t move. When we needed to pee, they would carry us and put us on the grass. I just didn’t understand what was going on whatsoever and my mom didn’t know that that was happening to us.”

TODAY chatted with Ayan about why it was important to share her story and what’s to come for the rest of the season. https://t.co/MALVbhgebS

Chanel told the therapist, “I don’t have a lot of memories because I feel like I block things,” People magazine reported.

She’s previously spoken in the past about how her father allegedly beat her and how there was “a lot of pain” in her home growing up.

“The crying, the sadness, the beatings,” Chanel shared. “That’s what I remember. A lot of pain.”

At one point, the Kenyan-born model said that after she met the man who would become her husband, Christopher, she went to a doctor so she could be sexually intimate with the man she loved.

“I couldn’t have sex,” Ayan shared. “And then I had to wait until I healed.”

The reality star also explained why she’s talking about something so personal and painful, hoping that stops others from going through what she did.

“I don’t think our girls should be going through this,” Ayan said. “The reason that I’m talking about it is to bring awareness to it and I want people to understand this happens every single day. If I could stop it and if that’s my mission, maybe that’s what I should be doing.”

All copyrights and legal uses attributed to content are located at the article origination: © Daily Wire, ‘We Were Circumcised’: ‘Real Housewives Of Dubai’ Star Recalls Terrifying Childhood Trauma

0 5
‘You See The Smile’: Brian Stelter Claims Biden Definitely Knew Mic Was Hot When He Called Doocy An SOB 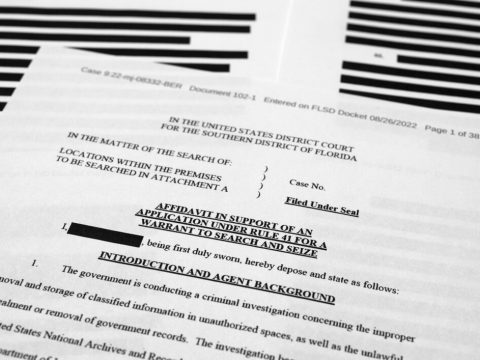 0 56
Here’s What We Learned from the Newly Released, Less Redacted Trump Raid Affidavit