Yesterday we reported on Lin Wood’s bombshell tweet about an almost $11 million grant award to the Georgia Secretary of State, Republican Brad Raffensperger and his accomplice Gabe Sterling.  We wondered who Sterling even was.  Now we have more.

In a recent tweet Lin Wood zeroed in on an anomaly, or something much, much worse, relating to the Secretary of State’s Office and this almost $11 million transaction with the state of Georgia. Wood’s bombshell tweet refers to an April 15, 2020 letter to the U.S. Election Assistance Commission (EAC) from Secretary of State Raffensperger, who is also Georgia’s Chief Election Official.

Georgia was poised to receive a $10,875,912 grant from the EAC for Covid-19-related election expenses. (The EAC, a federal entity which, by the way, certifies U.S. election machines, hardware and software, has some clear and shocking conflicts-of-interest of its own going on with its Advisory Board.) Raffensperger assured the EAC that the funds would be used to “prevent, prepare for and respond to coronavirus, domestically or internationally, for the 2020 Federal election cycle.”

The contact person at the end of the letter is Gabriel Sterling, who was appointed the COO of the Secretary of State’s office by Brad Raffensperger, the brand new SoS, shortly after Raffensperger was elected to the position in November 2018. Raffensperger’s predecessor was Brian Kemp, who had just been elected Georgia’s governor. Sterling, as COO, would be in charge of budgetary, human resources and administrative operations for the Secretary of State’s office. Sterling, strangely, has also been referred to, in multiple, recent media accounts, as Georgia’s “Statewide Voting System Implementation Manager.”

In the April 15 letter, Sterling lists a private gmail account address as his email account. The letter states: “If you have any questions about this request please contact our Statewide Voting System Implementation Manager, Gabriel Sterling, at [email protected]” Why wouldn’t Raffensperger refer the EAC to his COO, the employee in charge of budgetary issues for the SoS’s office? Why, instead, send them to Sterling as Georgia’s “Statewide Voting System Implementation Manager”? Well, it turns out Sterling ALSO has own LLC called Sterling Innovative Solutions, with the “Registered Agent” listed is Robert Gabriel Sterling. https://www.bizapedia.com/ga/sterling-innovative-solutions-llc.html.

Lin Wood is right on the money: the use of a gmail account indicates that Gabriel Sterling CANNOT be a state employee, at least for purposes of this April 15 letter sealing the deal on $10.8+ million in Covid-19 money for the Secretary of State’s office. Or can he? Furthermore, Georgia already has an “Elections Director,” Chris Harvey, it says so right on the Secretary of State’s letterhead. Why wasn’t Harvey listed as the contact person in the letter to the EAC? Why does Georgia ALSO need a “Statewide Voting System Implementation Manager”? Are taxpayers paying for two state agency people to do the job of one? The public needs immediate clarification upon these issues, given that Sterling continues to assure the public and the media – on behalf of the state of Georgia and its Chief Election Officer, Secretary of State Brad Raffensperger and his messed up, questionable, and clearly fraudulent election AND recount – that, Everything’s fine, move along, nothing to see here people.

Today we were provided with a little known YouTube account with only 50 or so views, where for some reason, Sterling shows up to discuss a number of things regarding the election process.

Starting at the 7:00 mark Sterling shares the following:  Sterling talks about how the Secretary of State’s office “expanded the emergency rule to provide for drop boxes to go through the entire election cycle now.”

At the 8:00 mark Sterling talks about “working with the ACLU and the Chamber of Commerce” and has given more than 6,000 names to counties for the election.

What is this radical operative doing as the Georgia statewide voting systems manager under Raffensperger?

Sterling admits the Secretary of State expanded the rules for voting and working with the activist group, the ACLU.

Let’s hope there are more questions answered related to the actions in Georgia’s Secretary of State’s office and the office where Gabe Sterling works.  These Georgia peaches smell rotten. 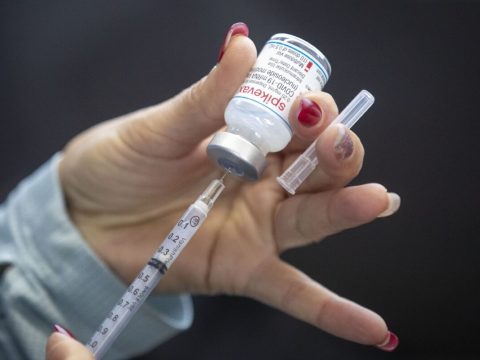 0 97
COVID Vaccine Injuries Quietly Being Compensated Around the World, Are You Eligible?