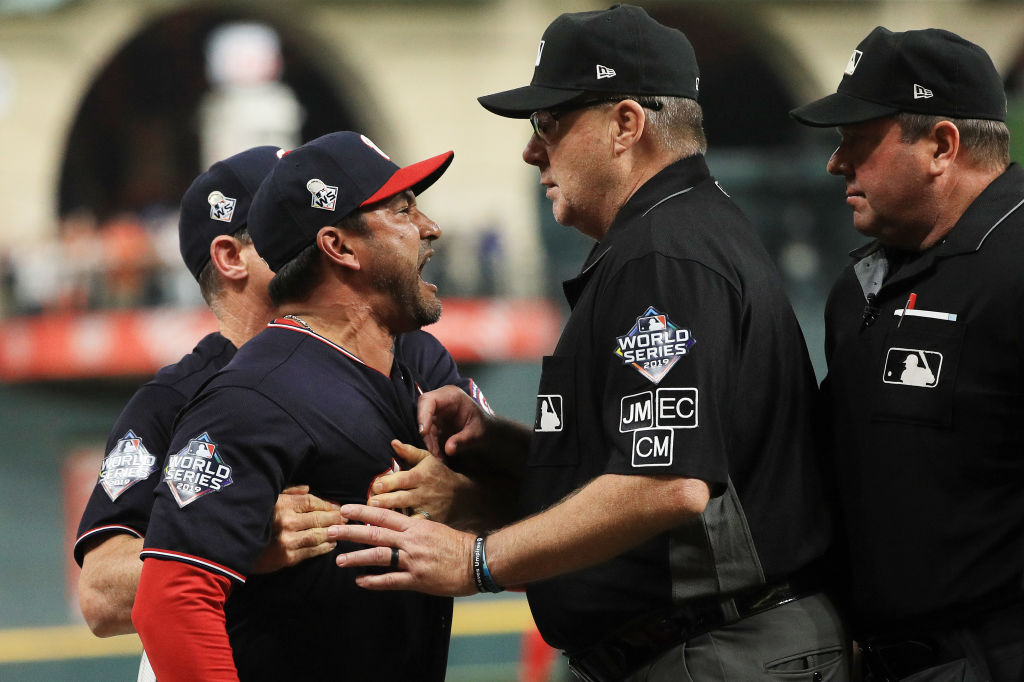 Martinez is no stranger to exiting games early — in 2019, he became the first manager ejected from a World Series game since Bobby Cox in 1996  — and he added to his impressive resume on Wednesday with an all-timer.

In the seventh inning of Wednesday’s game, Trea Turner of the Nationals struck out on a pitch that got away from Chicago Cubs catcher Wilson Contreras. Turner took off for first but was ruled out of the baseline by first-base umpire Chris Conroy as Contreras’ throw went into right field.

And Martinez lost it.

Dave Martinez with an early candidate for ejection of the yearpic.twitter.com/VoYIWXqJo5

After the game, Martinez continued venting.

Honestly, I am beside myself right now with this whole out-of-the baseline thing. I think it’s awful. There’s two parts to the rule, I get it. The second part of the rule is the judgment call. For me, it’s a bad judgment, plain and simple. If you want to run on the other side of the baseline, put the base over there, plain and simple. I argue that all the time. But if he’s running straight down the line, and the catcher makes a bad throw, what do you do? What do you do? He didn’t even run hard, and he made it to first base, and he’s going to come out and call him out? I’m over it. Really, I’m over it. I’m tired of it. I’m going to argue 1,000 times when that happens, I really am. I’m sick of it. You guys saw it. It’s a brutal call. And I’m done hiding it. I don’t know what they’re going to do about it, but it’s awful. And it wasn’t just today. I’ve seen it go on and on and on. They need to do something about it.

It’s not the first time Turner has been called out for impeding the ability of the fielder to field the ball. Martinez’s 2019 World Series ejection stemmed from another bang-bang play at first base involving Turner.

“It’s bad, it’s just bad,” Turner said after Wednesday’s game. “I know they’re trying out there and this and that and they’re trying to do their job, but that’s just, it’s terrible. It’s bad, and I think that was worse than Game 6.”

“I mean, running in a straight line to the base, I don’t know why I would bother doing anything different,” Turner added. “It comes down to a bad throw. If the guy makes a bad throw, then you’re out, and if he doesn’t, then you’re either safe or out. So he might as well just pick it up and throw it in the stands, and then the umpire gets to call you out.”

The ejection for Martinez was reminiscent of the infamous Lloyd McClendon ejection in 2001 when McClendon — also using first base to express his rage — actually removed it from the playing field.

Martinez may not have gone as far as McClendon, but his tirade still earns him a top spot among all-time best manager ejections.

Joe Morgan is the Sports Reporter for The Daily Wire. Most recently, Morgan covered the Clippers, Lakers and the NBA for Sporting News. Send your sports questions to [email protected].

0 6
Archbishop: Trans Procedures For Minors Is An ‘Emerging’ Topic Among Bishops