Associated Press reporter Matt Lee challenged State Department spokesperson Ned Price on Thursday over the Biden administration’s claim that Russia is preparing a “false flag” operation, including a film, to create a pretext to invade Ukraine.

The claim was also repeated by Pentagon spokesman John Kirby in briefings on Thursday. Yet the AP’s Lee, known for standing up to State Department spokespeople across both Democratic and Republican administration, asked for proof.

Price and Kirby suggested that Russia was preparing to create video of Ukrainian or Western atrocities against Russians, including actors and corpses, which would then be used to justify a Russian invasion into the eastern portion of Ukraine.

Lee questioned these claims, and suggested that the administration was being speculative. “You’ve shown no evidence to confirm that … What is the evidence that they plan — I mean, crisis actors, really? This is Alex Jones territory you’re getting into.”

(The reference to Alex Jones recalls a false claim by Jones that children killed in a school shooting were really “crisis actors.”)

That is when Price became irritable, claiming that the evidence was available in “declassified” intelligence information.

Lee countered: “OK, well, where is it? Where is this information?” he asked.

Price replied: “It is intelligence information that we have declassified.”

Lee: “Well, where is it? Where is the declassified information?”

Price answered: “I just delivered it.”

Lee refused to accept Price’s word as “declassified information,” and accused Price of failing to provide evidence, other than his word. He reminded Price of the many times the government had misled journalists — in Iraq, Afghanistan, and elsewhere.

Price then suggested if anyone doubted the credibility of the U.S. government and other allied governments, they were looking for “solace” in Russian propaganda.

On Thursday, at a press gaggle aboard Air Force One en route to New York, she suggested that journalists who questioned the official claim of a suicide bomb detonation during a raid on the leader of ISIS were trusting ISIS over the U.S. government. 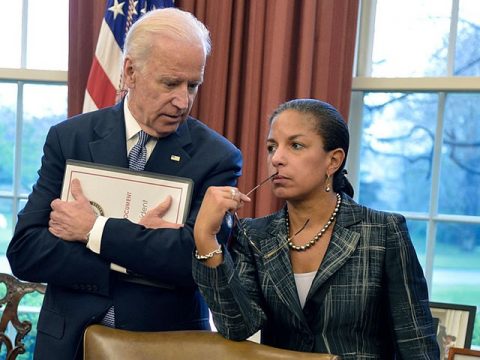