Democratic Washington Gov. Jay Inslee announced plans Thursday to introduce legislation that would regulate candidates and elected officials from spreading lies about elections that are likely to result in violence.

The legislation, which is still being written and has yet to be released, would be “narrowly tailored” to cover “false statements” made for the “purpose of undermining the election process or results,” according to Inslee’s announcement.

“This legislation attempts to follow the relevant U.S. and state supreme court opinions on this issue. We’re talking about candidates and elected officers knowingly throwing bombs at democracy itself when doing so is likely to result in violence,” Inslee said in a statement. (RELATED: Democrat-Run States Are Pushing Laws To Target Social Media ‘Misinformation’)

The Democrat announced the planned proposal on the first anniversary of the Jan. 6 Capitol riot, and he cited the event, as well as statements made by elected officials casting doubt on the results of the 2020 presidential election, as justification for the new speech restrictions.

Today I’m announcing my support for legislation currently being written that would outlaw attempts by candidates and elected officials to spread lies about free and fair elections when it has the likelihood to stoke violence.

“January 6 is a reminder not only of the insurrection that happened one year ago, but that there is an ongoing coup attempt by candidates and elected officials to overturn our democracy,” Inslee said. “They are willing to do this by provoking violence, and today I proposed we do something about that in Washington.”

Recognizing that his law may be unconstitutional as many false statements are protected under the First Amendment, Inslee cited a 1969 Supreme Court case, Brandenburg v. Ohio, in which the court ruled that speech “inciting or producing imminent lawless action and is likely to incite or produce such action” is not protected.

“We can outlaw actions that provoke political violence and in doing so also protect our democracy. There is more that can be done by states and Congress to protect our democracy,” Inslee said. “I am open to any proposal that will protect the will of the voters and the institutions they use to decide who governs them.” 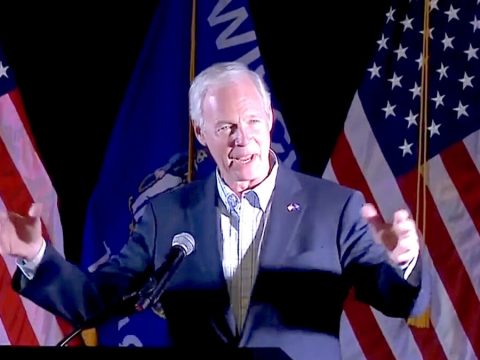 0 71
Why Did The Corrupt Corporate Media Refuse To Declare Ron Johnson The Winner In Wisconsin?