The United States military and other Biden administration officials are considering sending special forces troops to Ukraine to guard the recently reopened U.S. embassy in Kyiv as the Russian invasion continues.

According to U.S. officials, President Joe Biden has not been approached about the plans yet, but if they are approved, the special forces troops would only serve as defense and security of the embassy, the Wall Street Journal reported on Sunday.

Officials may also reinstate the Marine security guard detachment that typically provides security at embassies around the world.

While officials weigh sending dozens of American special forces troops to Ukraine, the State Department will provide its own security for the embassy, which will be comprised of guards in the Diplomatic Security Service.

There have been no official proposals on security at the Kyiv embassy delivered to Defense Secretary Lloyd Austin, Chairman of the Joint Chiefs of Staff Army Gen. Mark Milley or Biden.

“We are in close touch with our colleagues at the State Department about potential security requirements now that they have resumed operations at the embassy in Kyiv,” Pentagon press secretary John Kirby said in a statement. “But no decisions have been made, and no specific proposals have been debated at senior levels of the department about the return of U.S. military members to Ukraine for that or any other purpose.”

The U.S. Embassy in Kyiv shut down weeks before Russia launched its invasion of Ukraine in late February. Officials initially moved some functions and diplomats to Lviv, but the conflict eventually pushed all embassy personnel and operations into neighboring Poland.

On May 2, the U.S. charge d’affaires Kristina Kvien told reporters in Lviv that embassy personnel will “listen to the security professionals, and when they tell us we can go back [to Kyiv] we will go back.”

Kvien and several U.S. diplomats who were forced to relocate to Poland returned to Kyiv one week later to commemorate Victory in Europe Day with Ukrainian authorities. The American officials were escorted by U.S. Special Forces on assignment from Joint Special Operations Command in Fort Bragg, N.C., marking the first time American forces entered Ukraine since the start of the Russian invasion.

When Secretary of State Antony Blinken announced last week that embassy operations would resume in Kyiv, he asserted that the U.S. is “committed to confronting the challenges ahead” as “the war rages on.”

“Russia’s forces inflict death and destruction on Ukrainian soil every day.  Millions of Ukrainians are displaced from their homes and mourn the loss of their loved ones,” he said in a statement. “With strength of purpose, we reaffirm our commitment to the people and government of Ukraine, and we look forward to carrying out our mission from the U.S. Embassy in Kyiv.” 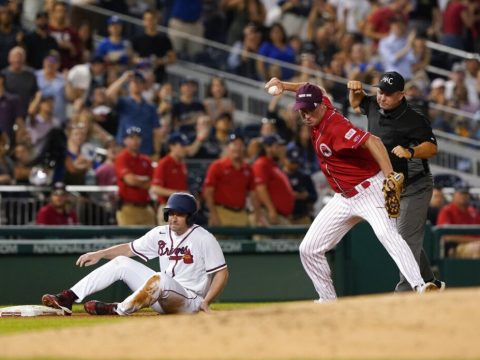