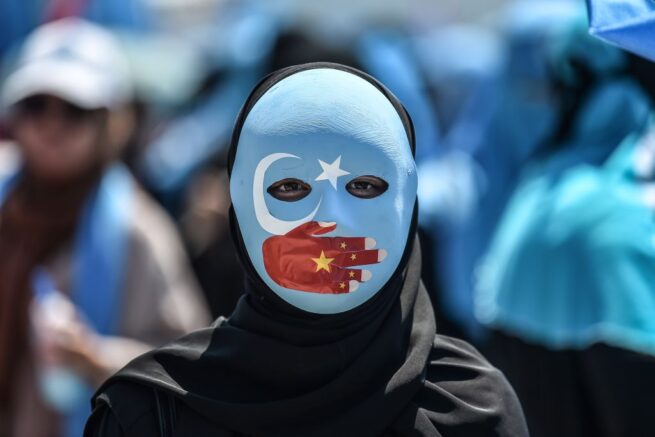 TOPSHOT – A demonstrator wearing a mask painted with the colors of the flag of East Turkestan and a hand bearing the colors of the Chinese flag attended a protest of supporters of the mostly Muslim Uighur minority and Turkish nationalists to denounce China’s treatment of ethnic Uighur Muslims during a deadly riot in July 2009 in Urumqi, in front of the Chinese consulate in Istanbul, on July 5, 2018. (Photo by OZAN KOSE/AFP via Getty Images)

A legal opinion released in the U.K. found compelling evidence of the genocide of Uighurs by Mainland China.

The opinion, commissioned by the Global Legal Action Network, said the Chinese Communist Party has committed crimes against humanity and genocide in the Xinjiang province. Legal experts said Chinese officials practiced enslavement, torture and forced sterilization of Uighurs in Xinjiang labor camps. They added that all of this amounts to religious persecution and ethnic cleansing.

“And we expect a total of more than 30 witnesses, probably two thirds of that will be fact witnesses, including victims or alleged victims,” Organizer Nick Vetch for the Tribunal on Chinese Crimes Against Humanity said. “Some people seek to extend its use to include something called cultural genocide, which may or may not exist in the minds of scholars and lawyers.”

The U.K. government has already set up a tribunal that will hold hearings on the crimes committed by the Chinese Communist Party.

The hearings are slated for this coming May and September.