Former President Donald Trump, who was repeatedly criticized by the mainstream media for perceived opposition to the COVID-19 vaccine he helped to develop, says everyone should support vaccines.

“It’s a matter of getting people out to, ideally, get the vaccine. If you have the mandate, the mandate will destroy people’s lives — it destroys people’s lives, just as the vaccine saves people,” he said. “I think that it’s really a question of tone. It’s a question of trust, and hopefully, the people that have had COVID, hopefully they will be given credit for that.”

Trump was booed for announcing during his recent “History Tour” with former Fox News host Bill O’Reilly that he had taken the booster. He chastised the small group of booers, saying, “Don’t, don’t, don’t… That’s all right, it’s a very tiny group over there.”

The former president, who contracted COVID-19 in October 2020, also encouraged the audience to get vaccinated, and he noted that his administration “did something that was historic” in helping to create a vaccine in record time.

President Joe Biden, who has been stingy in giving Trump credit, recently changed his tone, thanking the Trump administration on Tuesday for setting up Operation Warp Speed, which fast-tracked three versions of the vaccine and put in place a distribution system.

“Thanks to the prior administration and our scientific community, America’s one of the first countries to get the vaccine,” Biden said in a speech that set out his plan to battle the Omicron variant. “Thanks to my administration and the hard work of Americans, we led a rollout [that] made America among the world leaders and getting shots and arms.”

Trump said in his interview that he was “surprised” Biden thanked him.

“I’m very appreciative of that — I was surprised to hear it,” Trump said. “I think it was a terrific thing, and I think it makes a lot of people happy….I think he did something very good. You know, it has to be a process of healing in this country, and that will help a lot.”

“I may have been the vehicle, but we all did this together,” he added.

“When we came up with these incredible vaccines — three of them — and therapeutics, we did a tremendous job, and we should never disparage them,” Trump said. “We should be really happy about it because we’ve all saved millions and millions of lives all over the world.”

More than 200 million Americans are fully vaccinated, meaning they’ve taken two doses of a vaccine, according to Our World In Data. But that’s only 61% of the U.S. population (while another 12% have taken one shot). 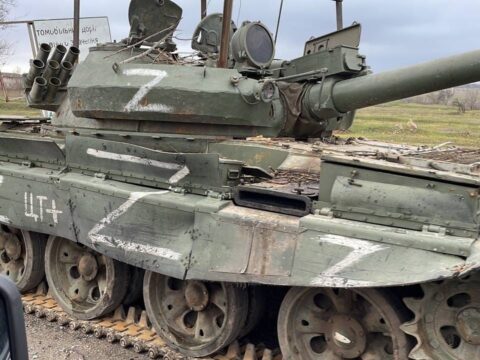 0 49
Can Sanctions Punish Russia Enough to Stop the Ukraine War?