A biologically male golfer who identifies as a transgender woman says that it is a “slap in the face to women” when “male-bodied” competitors dominate female sports.

Mianne Bagger, 55, became the first transgender athlete to compete in a professional golf tournament in 2004 at the Women’s Australian Open. Bagger acknowledged that though critics will accuse the trans golfer of being a “hypocrite,” Bagger does not think it is fair for biological males to compete against biological females.

“It’s crossed the line, in my view, it really has,” Bagger told the Australian TV’s “Insight. “It’s a slap in the face to women.”

“It’s crossed the line, in my view, it really has,” Bagger said. “It’s a slap in the face to women.”

The International Olympic Committee announced in January 2016 that transgender athletes would no longer be required to get transgender sex reassignment surgery in order to participate in the Olympics.

Biological males who believe they are transitioning to women must say that their gender identity is female, and not change that statement for at least four years, and must demonstrate that their testosterone levels are below the declared threshold for a year before they compete, the IOC said at the time. A new framework from the IOC in November 2021 said it would not mandate certain hormone levels anymore.

Bagger criticized this decision, telling “Insight” that it “almost denies the impact of testosterone on physical performance.”

That is “obviously utter rubbish,” the transgender athlete said, noting that “anyone with any basic understanding on biology and the difference between men and women knows it’s ridiculous. It’s male puberty that really grants boys and men that physical performance in sport.”

The trans athlete supports legislation that would ban biological males from competing in women’s events in Australia, News.com.au reported.

Bagger emphasized the importance of “inclusion” in “everyday society” and said that transitioning was a “pivotal” part of the trans athlete’s life, saying “We want equality, lack of discrimination, and of course every single person should have equal access to life and services and work in society.”

If there were tougher rules for trans athletes, Bagger would be open to them competing. But the trans athlete said that “current, softened policies that are requiring less and less medical intervention of a male-bodied person entering women’s sport” are not good enough.

“I’m seen as a bit of hypocritical voice at the moment, so I just have to take the abuse and whatever criticism that is going to come my way,” the athlete concluded.

Bagger’s comments follow backlash against the NCAA , which is ignoring national outcry over the inclusion of a biologically male athlete, Lia Thomas, in the recent NCAA Women’s Swimming Championships. Despite highly publicized calls for action from Virginia Tech swimmer Reka Gyorgy and University of Kentucky swimmer Riley Gaines — both of whom competed against Thomas, the NCAA has remained silent.

Gyorgy placed 17th in the 500 freestyle, meaning that she did not make it back to the finals and was a first alternate. If Thomas, a biological male who swims for University of Pennsylvania, had not participated, Gyorgy would have made it to the finals.

Gaines competed in the women’s 200 freestyle and tied for fifth place with Thomas. In an interview with The Daily Wire, she said she was made to hold the sixth-place trophy during award ceremony pictures, while Thomas was given the fifth-place trophy.

The NCAA Board of Governors updated its transgender participation policy in January, requiring transgender athletes to document “sport-specific” testosterone levels within their sport’s approved range at the beginning of the season and ahead of championship selections.

All copyrights and legal uses attributed to content are located at the article origination: © Daily Wire, Trans Golfer Says Biological Males Competing In Women’s Sports Is ‘A Slap In The Face To Women’ 0 5
John Lott: Progressive soft-on-crime policies’ are coming ‘back to bite them’ 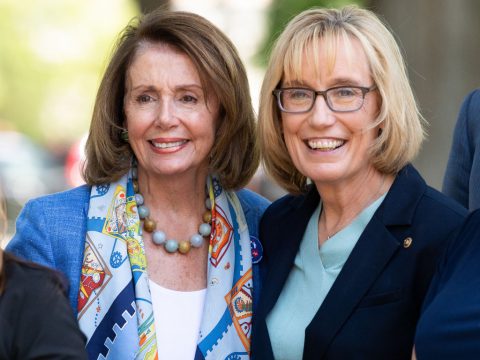