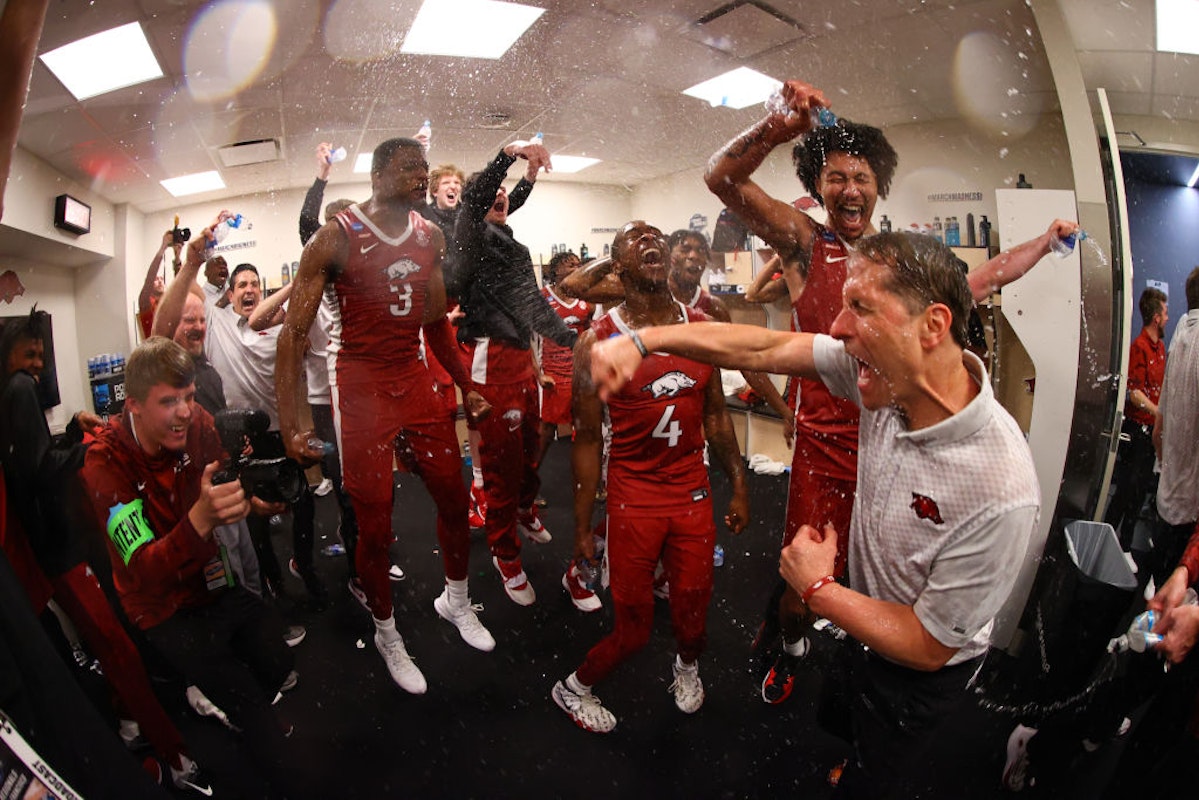 With the return of the 2021 NCAA tournament, the betting favorites did the heavy lifting, with two one-seeds facing off in the championship game.

And while a one-seed may very well win the 2022 NCAA tournament, the odds are getting slimmer by the day.

In the round of 32, one-seed Baylor went home early, losing to North Carolina in an epic matchup. On Thursday night, two more top seeds stumbled, with Gonzaga — the tournament’s number one overall seed — and Arizona, both going down in the Sweet 16.

For a record-tying fifth time, the Gonzaga Bulldogs entered the tournament as a one-seed and failed to win a title, losing to Arkansas 74-68 Thursday night. The normally high-powered Gonzaga offense — 87.2 points per game — was held in check by a stifling Arkansas defense, shooting 37.5% from the floor and making just five of 21 shots from beyond the arc.

“We just wanted to be physical, plain and simple,” Arkansas head coach Eric Musselman said. “We wanted them to feel bodies. Obviously they played a really tough schedule early in the season, but it’s been a long time in conference play since they faced a team like us.”

“Can’t compliment these guys and the entire team enough for the way that they buy in to game preparation. It’s probably the coolest thing I’ve ever been a part of that they just kind of do what we ask.”

It’s the second straight Elite Eight appearance for Arkansas, with a matchup against Duke on Saturday.

“We’ve been disrespected the whole year, so it’s just another thing for us,” sophomore forward Jaylin Williams said after notching a double-double. “We saw everything they were saying, we felt like they were dancing before the game. That was disrespect for us. We just came into the game playing hard and we had a chip on our shoulder. Every game we do.”

Arkansas was led by senior guard JD Notae, who had 21 points in the game on 9-29 shooting, throwing in six assists, six rebounds, and three steals.

In San Antonio, one-seed Arizona was outclassed and outworked from the opening tip, losing to Houston 72-60. The Wildcats never led in the game, as Houston’s swarming defense held Arizona’s stars in check. Bennedict Mathurin scored just 15 points on 4-14 shooting after putting up 30 on TCU in the second round, Christian Koloko had just 10 points following his 28-point outburst in the round of 32, and Azuolas Tubelis was a complete no-show, adding two points on 0-8 shooting from the floor.

“You’re better served if you play them a couple times,” Arizona head coach Tommy Lloyd said after the game. “They do the things they’re good at at such a high level. It’s hard to get comfortable the first time around. You can try to tell your guys what’s coming, but they actually have a lot better feel for it actually having experienced it.”

The Cougars will play Villanova in the Elite Eight for a chance to head to back-to-back Final Fours. Houston was third in the country in points allowed per game during the regular season (59.0 ppg) and locked down the high-powered Arizona offense.