Tom Cruise is king at the domestic box office once again.

Paramount’s “Top Gun: Maverick,” which was co-financed and coproduced by Skydance, is soaring to the top of the charts for its second weekend of release, drawing in a commanding $25 million on Friday from 4,751 locations. After enjoying the widest domestic opening last weekend with 4,732 North American cinemas, “Maverick” actually added 19 more for its sophomore outing.

The studio is projecting an $84.5 million haul through Sunday, a stunning 33% dive from its $124 million three-day opening. A soft decline like that would be a superlative achievement, marking the smallest drop in domestic box office history for a film that opened above $100 million. To compare, recent high grossers like “Doctor Strange in the Multiverse of Madness” and “The Batman” fell 67% and 50%, respectively, in their sophomore outings.

Even for a star like Cruise, a drop as low as 33% is largely unheard of in recent years. The actor’s last blockbuster, 2018’s “Mission: Impossible – Fallout,” fell 42.5% in its second weekend after opening to $61.2 million.

All this is to say that “Maverick” is doing very well. Word-of-mouth has been spectacular for the sequel, with the film earning a rare “A+” grade on Cinema Score, indicating maximum approval from general ticketbuyers.

Paramount expects “Maverick” to expand its domestic gross to $290 million through Sunday. It is already Cruise’s biggest film ever at the domestic box office, passing his previous best, the $243.3 million haul of 2005’s “War of the Worlds,” on Saturday.

“Top Gun: Maverick” will soon have competition in the form of fellow blockbuster “Jurassic World: Dominion” when it premieres in North America on June 10. Universal kicked off the release of “Dominion” overseas this week, debuting to a strong $16.7 million on Thursday with an expected weekend gross of $50 million plus.

Disney’s “Doctor Strange in the Multiverse of Madness” should take silver on domestic charts. The Marvel sequel added $2.6 million on Friday and is expected to expand its domestic gross to $388.6 million through Sunday. That places it on track to pass the $389 million haul of 2017’s “Guardians of the Galaxy Vol. 2” to become Disney’s ninth highest grossing Marvel Studios production.

Disney and 20th Century Studios’ “The Bob’s Burgers Movie” is projected for third. After taking in $1.3 million on Friday, the adaptation of the hit animated Fox series is expected to earn $4.4 million in its second weekend. That marks a sizable 64% decline from its opening, indicating that many fans of the series likely rolled out for the film as soon as it hit theaters.

Universal’s “The Bad Guys” will take fourth, with a projected fall of 24% in its seventh weekend. After a somewhat underwhelming opening, the DreamWorks Animation production has enjoyed a series of soft drops, benefiting from the market’s lack of kid-friendly fare. “The Bad Guys” should expand its domestic gross to $87 million through Sunday.

Focus Features’ “Downton Abbey: A New Era” looks to round out the top five of domestic charts. The costume drama sequel should add $3 million this weekend, expanding its domestic gross to $35.7 million.

The Kamal Haasan vehicle “Vikram” also got off to a solid start in its stateside release, drawing about $870,000 on Friday from 460 locations. The Indian thriller should earn about $2.2 million over the three-day frame.

Neon’s “Crimes of the Future” is making a soft impression, aiming for a tenth place opening after earning $490,000 on Friday from 773 locations. The David Cronenberg-directed film premiered at the Cannes Film Festival only weeks ago. While many appreciated the filmmaker returning to the realm of body horror, consensus seemed to agree that his latest isn’t exactly the most commercial prospect.

Finally, Columbia Pictures added 954 locations for “Morbius,” the latest entry in the studio’s self-branded Universe of Marvel Characters, giving the Jared Leto vehicle one last push at the box office in its tenth weekend. The film is projected to earn $280,000 over the three-day frame, marking an 840% uptick in ticket sales from last weekend. 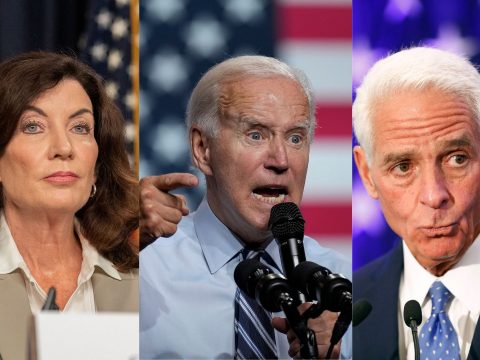 0 91
Democrats Slam Republicans As Haters, Semi-Fascists, And Tell Them To Get Out Of Town – All In One Week