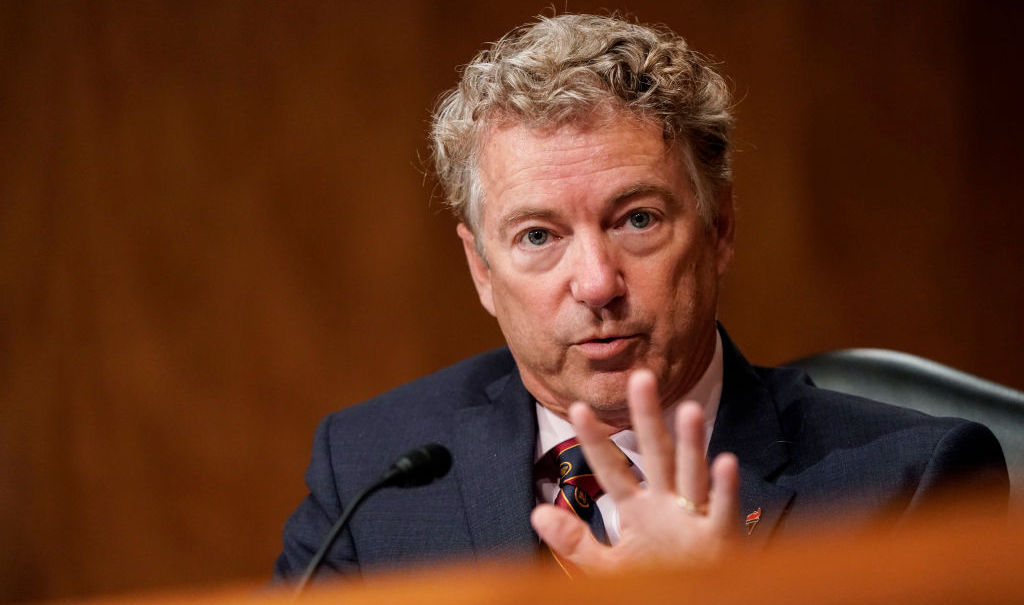 Sen. Rand Paul (R-KY) is planning to introduce legislation to revoke a federal mask mandate for travelers on airplanes.

The Transport Security Administration (TSA) has continued to mandate that all travelers wear masks on airplanes with limited exceptions as many state governments have rolled back COVID-19 restrictions. The current TSA mandate is in place until at least September 13.

“When the Senate returns to session, I will be introducing an immediate repeal of the mask mandate on planes. Enough! Time to stop this farce and let people travel in peace!” Paul tweeted on Thursday.

When the Senate returns to session, I will be introducing an immediate repeal of the mask mandate on planes. Enough! Time to stop this farce and let people travel in peace!

Paul has needled public health experts and the Biden administration for months over health restrictions put in place over COVID-19. Paul has argued against requiring masks for anyone who is vaccinated or who has already contracted and recovered from COVID-19.

In March, Paul grilled National Institute of Allergy and Infectious Diseases Director Dr. Anthony Fauci over his use of masks despite being vaccinated. At the time, Fauci had been acting in accordance with guidance from the Centers for Disease Control and Prevention (CDC). The CDC later retracted their guidance and said that vaccinated people do not need to wear face masks.

Paul went after Fauci during a March 18 committee hearing for playing “theater” with masks. As The Daily Wire reported:

After more back and forth, Paul blasted … Fauci:

“You’ve been vaccinated and you parade around in two masks for show. You can’t get it again. There’s virtually 0% chance you’re gonna get it, and yet you’re telling people that have had the vaccine, that have immunity — you’re defying everything we know about immunity by telling people to wear masks that have been vaccinated. Instead you should be saying there is no science to say we’re going to have a problem from the large number of people who’ve been vaccinated. You want to get rid of vaccine hesitancy? Wearing masks after they get the vaccine? You want people to get the vaccine? Give them a reward instead of telling them that the nanny state is going to be there for three more years and you gotta wear a mask forever. People don’t want to hear it; there’s no science behind it.”

Paul has also grilled Fauci on funding for the lab in Wuhan that is a place of interest as a potential origin point for the COVID-19 virus. Fauci denied that the U.S. had ever funded the type of research that potentially led to the COVID-19 outbreak. Paul pushed, however, citing a 2014 National Institute of Allergy and Infectious Disease (NIAID) grant to an organization called EcoHealth Alliance that, in turn, donated funds to the Wuhan lab. As The Daily Wire reported:

EcoHealth Alliance paid the lab in Wuhan $598,500 over five years, according to PolitiFact, which also reported “all parties involved in the grant to the Wuhan Institute of Virology have denied that it involved gain-of-function research.”

Fauci then denied Paul’s claim that the research done by Dr. Ralph Baric, whose webpage says he obtained a $6 million grant from NIAID in 2017 “to accelerate the development of a promising new drug in the fight against deadly coronaviruses,” could be characterized as “gain-of-function.” Paul cited the hundreds of doctors in the Cambridge Working Group who would disagree.