Column: The closer attention you pay to Biden, the less he has to say

President Joe Biden is “rattled,” according to NBC News, and “looking to regain voters’ confidence that he can provide the sure-handed leadership he promised during the campaign.”

How? By trying to change the media narrative. On May 30, Biden published an op-ed in the Wall Street Journal that explained “My Plan for Fighting Inflation.” The next day, Biden wrote a “guest essay” for the New York Times on “What America Will and Will Not Do in Ukraine.”

Bad poll numbers and a collapsing domestic and international situation have excited the typically drowsy president into action. There’s a problem, though. The closer you read Biden’s op-eds, the less he has to say. This new, annoyed, engaged Biden may be a prolific writer and speaker. But he’s not an incisive one. He won’t admit that there is a connection between his ideology and America’s problems. He can’t decide between giving Ukraine the weapons necessary to defeat Russia or settling for a war of attrition.

Biden’s Journal op-ed is a masterclass in passing the buck. He doesn’t bring up his “plan for fighting inflation” until midway through his thousand-word piece. My inner college professor wanted to send the article back to him with suggestions for revision. Number one: Always move your best material to the top!

The plan itself is gauzy and thin. “The Federal Reserve has a primary responsibility to control inflation.” You wouldn’t know that from listening to Progressives, including some of Biden’s nominees to the Federal Reserve, who argue that the Fed’s interest in price stability distracts it from promoting full employment, green energy, and diversity, equity, and inclusion. Now Biden wants the Fed to correct not only its mistakes, but his own. Let’s see if his faith in an independent central bank can stand the test of higher interest rates, higher unemployment, and lower incomes.

Parts two and three of Biden’s inflation plan are the remnants of his Build Back Better agenda: some clean energy and housing subsidies here, a few tax hikes there. He mentions his use of the Strategic Petroleum Reserve to lower gas prices, but not his appeals to Venezuela and OPEC to boost the oil supply. As for the obvious answers to America’s energy problems—a complete reversal of Biden’s hostility to oil and gas exploration and production, huge investments in nuclear power, and emergency efforts to increase refinery capacity—Biden has no words. His devotion to the environmental lobby and to green energy blinds him. If the Progressive Left rejects nuclear power, the “clean energy future” it desires won’t arrive.

This mismatch between ends and means is visible in Biden’s Ukraine policy. The president tells New York Times readers that the United States sends Ukraine weapons “so it can fight on the battlefield and be in the strongest possible position at the negotiating table.” The desired end state is “a democratic, independent, sovereign, and prosperous Ukraine with the means to deter and defend itself against further aggression.” And Ukrainian president Volodymyr Zelensky is in the driver’s seat. “I will not pressure the Ukrainian government—in private or public—to make any territorial concessions.”

All good. Why, then, limit the weapons deliveries to systems with ranges of 40 miles? Why slow-walk and agonize over each tranche of support? Why engage with Russia in farcical and dangerous negotiations over Iran’s nuclear weapons? Why not take a more active role in peace talks between Ukraine and Russia? The Biden policy is static even as the shape of the war changes in ways that favor the aggressor. The president’s goals are laudable. But his tactics are calibrated for a war that Ukraine is winning.

And Ukraine is not winning. At least not now. The Ukrainians defeated Russia’s attempt at regime change. But they have been less successful in removing Russia from eastern Ukraine and from their port cities in the south and southeast. Absent a change in Biden administration policy—in the ranges of weapons systems America provides Ukraine, in the establishment of a humanitarian corridor to relieve the Russian blockade of Ukrainian Black Sea ports, or in a major diplomatic effort—the war will turn into a frozen conflict with no clear resolution and with mounting humanitarian costs. How that situation would help anyone, including Biden, is unclear.

Then again, little Biden says or does makes sense from the vantage point of either policy or politics. He’s right to be rattled. He’s also clueless.

0 21
A Chinese Invasion of Taiwan: What Response Would Americans Support? 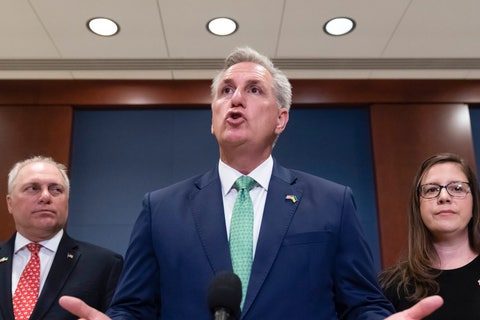