“The hell with the Supreme Court — we will defy them,” Rep. Maxine Waters, D-Calif., exhorted protesters. “You see this out here?” added Waters in reference to the size of the D.C. protest. “You ain’t seen nothing yet.”

Rep. Alexandria Ocasio-Cortez, D-N.Y., called the court “illegitimate” and urged supporters “into the streets.” Cities and churches, in response, are preparing for protests and potential violence, especially given recent attacks against pro-life organizations and a politician.

Indeed, dozens of pregnancy help centers and other pro-life groups in states across the country have endured threats and seen their offices vandalized in recent weeks. Churches have experienced much the same. Authorities recently arrested a California resident who traveled to DC and allegedly told a Maryland 911 operator that he wanted to kill Supreme Court Justice Brett Kavanaugh (the man pled not guilty to attempted murder).

Threats, vandalism, doxxing, violence — is this what the pro-choice movement is about? It certainly seems that way, especially when activist groups threaten to “take increasingly drastic measures against oppressive infrastructures,” and prominent pro-choice politicians remain silent about the rising number of such incidents against pro-lifers.

Then again, perhaps we shouldn’t be surprised, given abortion has always been defined by an act of violence against the innocent. The pro-choice movement is simply showing its true colors.

Are They Only Getting Started?

After the Supreme Court leak of the Roe repudiation, pro-choice activists aggressively sought to intimidate the highest court in the land. Pro-choice group “Ruth Sent Us” a couple of weeks ago alluded to targeting Supreme Court Justice Amy Coney Barrett at her home, church, and the school her children attend. Protestors have regularly appeared outside Justice Samuel Alito’s home in Virginia, while others on social media have threatened to kill him.

A DHS memo in May warned that “domestic violence extremists and criminal actors have adopted narratives surrounding abortion rights to encourage violence, likely increasing the threat to government, religious, and reproductive healthcare personnel and facilities and ideological opponents.” And so they have.

A group calling itself “Jane’s Revenge” distributed flyers across the U.S. capital and country proposing a “night of rage” if the court overturns Roe v. Wade. Now that it has, and massive protests are planned across the country, one wonders when that shoe will drop. Given the heated rhetoric (and use of Molotov cocktails), it’s possible America is set to witness yet another wave of destruction and violence, as we did in 2020.

But it’s not just pro-choice activist groups who are taking a more extreme, aggressive stance towards their opponents. Corporate media since the Dobbs v. Jackson Women’s Health leak have attempted to arouse the ire of the pro-choice base, warning that an end to Roe will usher in a dystopian future that will vitiate women’s freedom to levels not seen since… well, never, if you ask them. The New York Times now has an entire section devoted to keeping its readers’ angst about abortion at a constant fever pitch.

The Washington Post on June 20 published a front-page story on a Texas teen who discovered she was pregnant 48 hours before the recent Texas abortion ban took effect. WaPo reporter Caroline Kitchener tweeted about her story: “Nearly 10 months into the Texas abortion ban, women have started having the babies they never planned to carry to term.”

Yet as pro-life activist Lila Rose retorted to Kitchener, “She trusted you and you wrote a cruel, condescending piece about her. You objectified her & her beautiful girls for your own pro-abortion ideology.” Indeed, imagine being one of those twin girls years from now, discovering your story was exploited by a national newspaper with the implicit message that perhaps it would have been better if you hadn’t been born.

Prominent feminist pundit Jill Filipovic doesn’t seem to have a problem with that — she claimed the story is a “a perfect illustration of how girls and women are used, manipulated, and discarded, their futures and dreams snuffed out.”

Who Is The Real Extremist?

A “take no prisoners” approach to reporting on abortion — which is really opinion as journalism — represents only one aspect of the media’s pro-choice campaign. Another is the increasingly radicalized rhetoric in their public opinions.

Feminist columnist Monica Hesse in a caustic January column censured the pro-life cause’s “brave new world” of “state-sanctioned control over women’s bodies,” and asserted that the pro-life movement, not individual persons, should be held responsible for everyone who gets pregnant. Such language matches well with the shift in pro-choice rhetoric from “safe, legal and rare,” to “shout your abortion” and “abortion without limits.” Abortion providers tattoo clothes hangers on their bodies. Brave new world, indeed.

In truth, the pro-choice movement wants an American regime whose abortion laws are far more extreme than those found in Western Europe. Already, the United States is one of only seven countries that allow elective abortions after 20 weeks of pregnancy.

That puts America in the company of not only Canada, Singapore, and the Netherlands, but communist, totalitarian regimes North Korea, China, and Vietnam. This is something to be proud of? Most of Europe has more restrictive abortion regulations than the United States: only three of 42 European countries that permit elective abortion allow it past 15 weeks.

For all the bluster of the pro-choice cause — absurdly warning that overturning Roe will cause a cascade of secondary and tertiary effects resulting in an imagined tyrannical theocracy — it is they who have promoted a regime of violence.

Let us not forget that abortion as early as six weeks stops a beating heart and ends the formation of a human brain. More fundamentally, abortion ends a human life when it is most vulnerable. It is an act of terrible, state-sanctioned violence that has caused the deaths of 63 million Americans.

Moreover, as Ryan Anderson and Alexandra DeSanctis argue in their new book, the real secondary and tertiary effects are the physical and psychological harm abortion causes to women and families, the distortion of our constitutional regime, and the twisting of medical practitioners into executioners.

Perhaps, then, it isn’t surprising that the rhetoric of the pro-choice cause has turned to acerbic and profane, and that their public activities are increasingly destructive and violent. Abortion was, and always will be, an unprovoked act of murderous aggression against the innocent.

That its promoters have been willing to pursue a scorched-earth policy towards their opponents — regardless of the collateral damage to many young women and children exploited by pro-choice messaging campaigns — simply proves what’s been true since the beginning. In the words of Anderson and DeSanctis’s new book, abortion harms everything and solves nothing.

Casey Chalk is a senior contributor at The Federalist and an editor and columnist at The New Oxford Review. He has a bachelor’s in history and master’s in teaching from the University of Virginia and a master’s in theology from Christendom College. He is the author of The Persecuted: True Stories of Courageous Christians Living Their Faith in Muslim Lands. 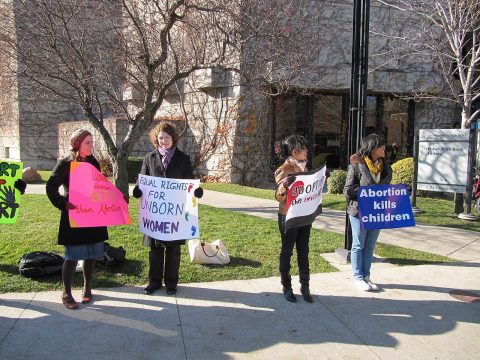