In the end, there were only two ways to die: accidentally or on purpose. Medication and replacement body parts had eliminated most of the so-called “natural causes” of death. All that was left were catastrophes, suicides and murders. Catastrophes happened all the time. Over a life span of a thousand years or so, the chance of dying in a fatal crash or fall was somewhere around a hundred percent. Suicides were common, too. Existence could seem endless after a while. About 64 percent of men and 67 percent of women eventually terminated their lives by their own hands.

Murder, though — that was more or less unheard of. Most of the motives had become obsolete. Love couldn’t last as long as life did. Ambition flagged. Most appetites were satisfied by the state and its machines. Only ennui tempted the rare unmedicated psychotic to the crueler sort of thrills. As a result, most police would go their whole careers without ever encountering a homicide.

Which was why Detective Chesterton wore a look of obsession as he followed Holbrooke relentlessly through the snow.

The snow had been coming down heavily for close to an hour. The evening air was a blinding swirl. The statues in the park were decked with white. The sidewalks were thinly blanketed. The streets glistened, reflecting the traffic signals, red, yellow, green, as the auto-cabs churned the drifts to water.

Chesterton had been tracking the man ahead of him for 37 years, ever since the day he’d found the two bodies in the penthouse bedroom crosstown. Sarah Hutchinson had been posed angelic on the bed, hands crossed on the bodice of her silken nightgown, golden hair fanned artfully around her lovely and peaceful face. On the floor in the corner lay what was left of Martin Lane, the body sprawled beside a chair, the head a bloody mess. Chesterton believed Lane had sat in that chair admiring his handiwork — his smothered lover — before pressing the pistol to his temple and pulling the trigger to end it all. Given the way he’d laid her out so tenderly, it seemed clear that he had loved her in his fashion.

Dimly visible through the storm now, Holbrooke moved from shadow to streetlight, his hands shoved deep into the pockets of his overcoat, his head bowed so that his fashionably retro fedora caught the brunt of the wind. Just ahead of him lay the Corner, a tavern as fashionably retro as his hat. The lighted squares of its front windows were warm and inviting in the miserable weather.

Chesterton paused a moment on the sidewalk, hoping the blizzard hid him from view. He watched, shivering, as Holbrooke pulled open the tavern’s heavy wooden door.  The yellow glow from within fell on the killer’s chiseled features. The Detective felt a thrill as he caught a glimpse of the man’s eyes, those unmistakable eyes. He was certain this was the man he wanted.

The detective waited a few moments after Holbrooke had disappeared inside. Then he pushed on through the storm and entered the tavern himself.

The place was crowded, loud and jolly with voices, a warm relief from the wet streets and from the cold. Men and some women nursed their medications, cheering for various sports on the big screens. Men and some women pushed in and out of the booths in back where the sexbots were. Men and the rare woman sat at tables fully sedated, engaging in desultory conversation, or just crying quietly.

Chesterton worked his way to the bar through a cluster of shouting men. Someone in the 1960’s had scored a goal on one of the screens. All the games were old games, of course. No one would risk injury by playing now.

When the detective finally managed to snag the server-bot’s attention, he ordered a double Mood Adjustor on the rocks. Then, carrying his glass, he shouldered a path through the crowd to the back room. There was Holbrooke, alone in a corner booth, with a frothy mug of Contentment on the tabletop in front of him. Chesterton walked over and sat down across from him with no invitation, no word. He felt that electric excitement again as Holbrooke looked up at him. Those eyes. They were the only thing about the man that had not changed over the centuries.

For a moment, Holbrooke seemed startled, even confused. Then, strangely, he seemed to understand. It was as if, Chesterton thought —as if the killer had been waiting for this moment. As if he’d known it would come. One corner of his mouth quirked upward. He lifted his mug, and saluted Chesterton before sipping the foam.

He gasped out of the drink: “Ah!” Then “Well?” he said. He had a deep, steady, self-certain voice. A permanently ironic expression on his handsome features. Except for those unchanging eyes.

All copyrights and legal uses attributed to content are located at the article origination: © Daily Wire, The Man Who Outsmarted The Devil

0 3
Pedestal Where Robert E. Lee Statue Stood To Be Taken Down, Land Transferred To City Of Richmond 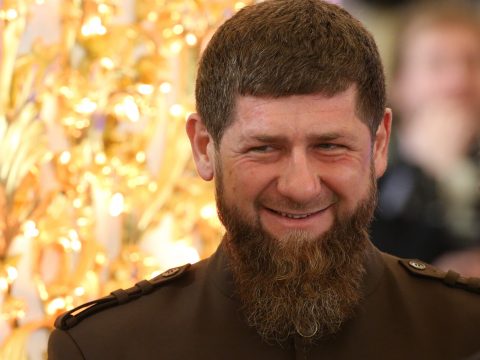