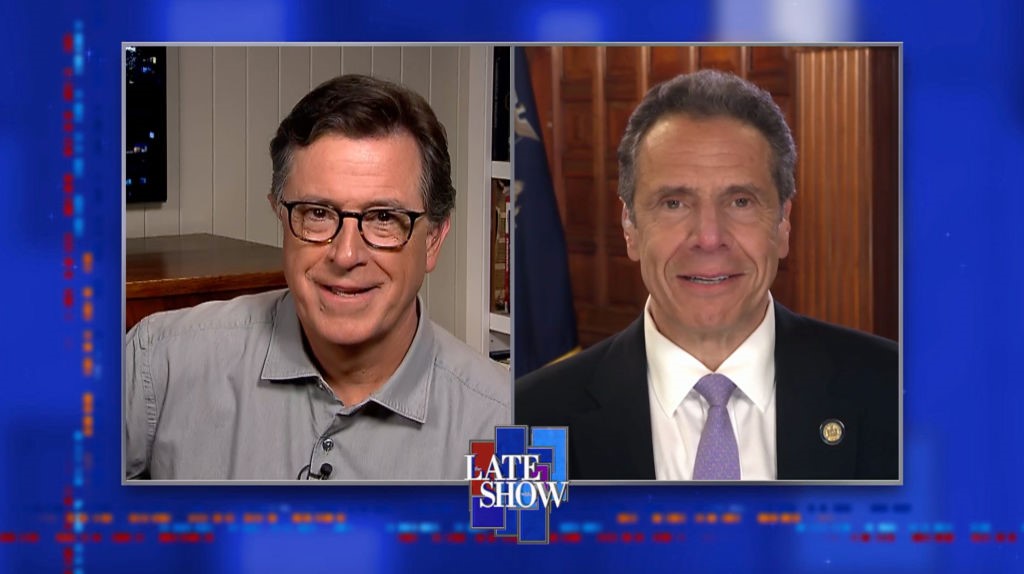 “Cuomo announced today that he will resign amid multiple allegations of sexual harassment, so tune in to CNN tonight for … I don’t know, a rerun of the History of the Sitcom?” Seth Meyers joked on “Late Night.”

Meyers also mocked the governor, who made more than a million dollars with a book on his response to the COVID-19 pandemic.

“New York Governor Andrew Cuomo announced today that he will resign amid multiple allegations of sexual harassment. And this is, frankly, amazing — he made the announcement via book,” he said.

Amy Poehler, who was a guest on the show, joked about the “Cuomo go-go,” then the two discussed the ways Cuomo said he greeted people, including sometimes touching their stomach.

“Don’t let the door hit you on the butt on the way out,” he said, prompting cheers from the audience. “But if it does, that door should also resign.”

Colbert then mocked Cuomo for saying he would not relinquish power for two weeks, saying he was doing so “for reasons that I do not understand.”

“For now, Cuomo’s still governor, because, for reasons I do not understand, Cuomo’s resignation will take effect in 14 days. Evidently, he gave himself two weeks’ notice,” Colbert said.

The comedian played some clips from Cuomo’s press conference in which the governor sought to explain his actions, which was also widely mocked on social media.

Colbert also roasted Cuomo for claiming he “didn’t realize” he crossed “a line that has been redrawn.”

“I don’t know exactly what line he’s talking about, but hopefully he’ll explain it in his new book, ‘Andrew and the Purple Crayon,’” Colbert said.

“Warning — that’s not a crayon in his hand,” Colbert said as a cartoon of the governor appeared. “But it is purple.”

The funnyman also noted that Lt. Gov. Kathy Hochul, who will become the first woman to be governor of New York, will be taking the seat vacated by Cuomo, adding, “Hopefully after putting a towel down first.”

Jimmy Fallon opened “The Tonight Show” by saying it was “big day here in New York as Andrew Cuomo announced that he’s resigning as governor.”

“During his remarks, he said that it was best that he step aside — and then every woman in the room took two steps aside,” Fallon said.

“It’s gonna’ be tough for Cuomo — with a track record like this, his only future is either president or Supreme Court justice,” he said.

Fallon also mocked CNN, saying after Hochul “was announced as New York’s next governor, CNN offered a prime time show to her sister.”