A Tennessee woman pleaded guilty on Tuesday to “concealing material support and resources”  which were supposed to aid a Syrian Islamic terrorist organization after an undercover investigation by the feds.

Georgianna A.M. Giampietro, of Sparta, Tennessee, admitted her guilt at a U.S. District Court in Middle Tennessee and could face up to a $250,000 fine and 10 years in prison. The 36-year old was indicted for attempting to help a Foreign Terrorist Organization back in August 2019.

“I commend our law enforcement partners and our prosecutors who have worked diligently to investigate this case and bring this individual to justice,” U.S. Attorney Mark Wildasin said in a statement. “All attempts to provide support to terrorist organizations will receive the full attention and resources of our office and law enforcement to ensure that those who engage in such activity are held accountable.  The safety and security of the American public demands no less.”

Back in September 2018, Giampietro attempted to aid an undercover agent who was trying to go overseas to become part of Hayat Tahrir Al-Sham (HTS) in Syria. HTS, a militant Sunni Islamic group that has had ties to al-Qaeda, was designated as a Foreign Terrorist Organization by the State Department in May 2018. The group has been embroiled in the Syrian Civil War.

“Today’s actions notify the U.S. public and the international community that HTS is an alias of al-Nusrah Front,” the State Department said at the time. “Terrorism designations expose and isolate organizations and individuals, and deny them access to the U.S. financial system.”

According to authorities, Giampietro provided the agent with the procedure about how to join HTS. It involved advising the agent (alongside the agent’s “husband” who was going to fight for HTS) to cut ties with other people in the six to eight months before going to Syria, purchasing new phones, and evading law enforcement. Giampietro suggested making it to Syria via Turkey.

Giampietro also communicated with contacts who she said could help the agent make it to Syria. She suggested that the agent and her husband travel to Afghanistan instead as she was reportedly told by a contact that there really wasn’t any jihad going on in Syria.

The feds claim that Giampietro knew that HTS was a Foreign Terrorist Organization, and yet still intended to aid it. She gave information to the agent about how to get in touch with her contact who was supposed to aid the couple in their trip to Syria.

She used an encrypted messaging system, where the messages would sometimes delete so that they could not be read.

“Protecting the United States from terrorist attacks is the FBI’s number one priority,” Special Agent Douglas M. Korneski stated. “This case once again demonstrates the FBI’s dedication to vigorously pursue those who provide material support to terrorist organizations, and hold them accountable for their conspiratorial actions.” 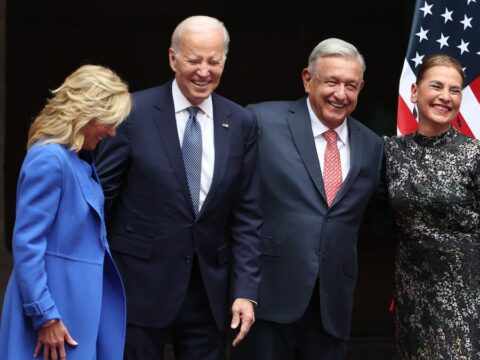 0 63
Can’t Make It Up: Mexican Prez Thanks Biden For Building ‘Not Even One Meter’ Of Border Wall

0 23
Fla. couple charged with child neglect after their 21-month-old child overdosed on cocaine