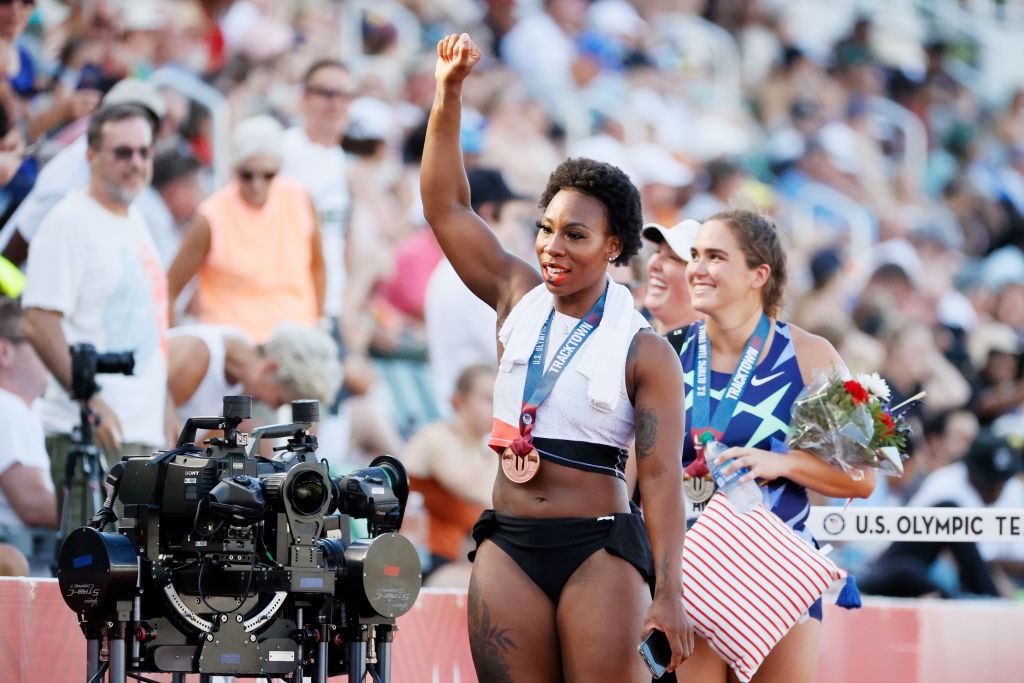 Team USA’s Gwen Berry, who made headlines after she turned her back on the American flag during a medal ceremony at the U.S. Olympic Trials, says she plans to stage a similar protest if she medals at the Tokyo Olympics.

Berry made it through qualifying rounds for the hammer throw over the weekend in the event’s Group B preliminaries, earning her the ability to compete in the women’s medal round on Tuesday.

Although Berry is not expected to make it to the medal podium — she would have to defeat not only her American teammate, Brooke Anderson, but world-leading hammer throwers from China and Poland — she said, in a post-qualifier interview Saturday, that she intends to make a political statement if she does.

“I feel like I’ve earned the right to wear this uniform,” Berry said first, addressing critics who claimed she should be replaced by a more patriotic athlete, or that she could forgo her position on Team USA if competing under the American flag was a problem. As the Daily Wire previously reported, some lawmakers had floated the idea of booting Berry from the team if she continued to denigrate the United States.

“I’ll represent the oppressed people,” Berry added. “That’s been my message for the last three years.”

Berry first protested the American national anthem in international competition when she won a medal at the Pan American Games two years ago. Then, she also turned her back on the flag during her medal ceremony, earning her a fine from the Games themselves, which prohibit political demonstrations.

Berry made headlines more recently, though, after turning her back on the national anthem during the US Olympic Trials after taking the bronze medal. Berry, draped in an “activist athlete” tee-shirt, looked directly at the press during the protest, rather than turn toward the stars and stripes alongside her fellow athletes.

Later, Berry later claimed that she believed the anthem incident was a “set-up” — an allegation that US Track and Field vehemently denied to the Associated Press.

“I feel like it was setup,” Berry said with a burst of laughter. “I feel like they did that on purpose, and I was pissed, to be honest. I was thinking about what should I do. Eventually, I just stayed there and just swayed. I put my shirt over my head. It was real disrespectful. I know they did that on purpose, but it’ll be all right. I see what’s up.”

“The national anthem was scheduled to play at 5:20 p.m. today,” USA Track and Field spokesman Susan Hazzard said. “We didn’t wait until the athletes were on the podium for the hammer throw awards. The national anthem is played every day according to a previously published schedule.”

Berry told the media that the negative attention from before the Games is not affecting her performance in Tokyo.

“I’m just focused on what I need to do,” Berry told reporters. “Because all those people who hate me, they aren’t here. So they can’t affect me.”

The International Olympic Committee has loosened restrictions on athlete protests for the Tokyo Games, watering down its infamous Rule 50, barring political demonstrations from the Olympic Games themselves. The IOC does still prohibit medal stand protests, however.

0 25
Nikole Hannah-Jones: 'We Are Going into a Dark Age of Repression and Suppression of the Truth' by Banning CRT