Justices Kavanaugh, Barrett signaled their intention to rule in favor of abortion providers

The Supreme Court seemed ready on Monday to let abortion providers in Texas proceed with a legal challenge to the Texas Heartbeat Act.

Abortion clinics and the Biden administration are separately challenging the law in court, and the justices heard arguments on Monday as to whether their challenges can proceed. The Biden administration faced tough going, but a majority of the Court seemed to accept the abortion clinics’ argument that they can work around the act’s novel enforcement structure by simply banning courts from accepting lawsuits filed under the act.

A five-justice majority in early September allowed the act to take effect over vigorous dissents from the liberal trio and Chief Justice John Roberts. But on Monday, Justices Brett Kavanaugh and Amy Coney Barrett signaled they will join the four September dissenters and allow at least the clinics’ legal challenge to go forward.

Monday’s cases are part of an epochal reckoning with abortion rights underway at the Supreme Court. The Court in December will consider whether to overturn Roe v. Wade. Amid continued uncertainty over the future of abortion access, congressional Democrats are working to enshrine abortion in federal law, while red-state legislatures are crafting a bevy of restrictions on the procedure.

It’s difficult to subvert the act in its entirety because private citizens are responsible for its enforcement. When a court finds a particular law unconstitutional, it bars the relevant government officials from enforcing it. That path isn’t available here because any number of ordinary people can enforce the act.

In the first of Monday’s cases, abortion clinics in Texas came up with a workaround that seemed to persuade a majority of the Court. In a 1908 case called Ex parte Young, the Supreme Court said that state officials can be sued in federal court for violating constitutional rights. The clinics argue that Texas court officials are proper defendants under Young and could be forbidden from accepting Heartbeat Act lawsuits.

The Supreme Court has never said that state court officials can be sued under Young. Justice Clarence Thomas said it may even be forbidden by precedent. But a majority of justices seemed comfortable with allowing the clinics to go forward with a Young case against Texas state court staff.

Abortion clinics in Texas say they are complying with the act and have stopped offering the procedure once they can detect fetal heartbeats. Were they to restart later-term abortions, the clinics could be sued anywhere in the state for each abortion performed. Marc Hearron from the Center for Reproductive Rights, who represented the clinics before the High Court, said that “chilling effect” is another reason to let the clinics’ lawsuit go forward.

“The combination of all of those factors together creates a chilling effect that is preventing the exercise” of constitutional rights, Hearron told the Court.

Justice Amy Coney Barrett seemed concerned that the act does not give abortion providers a fair chance to defend themselves, and she could vote with the clinics on that basis.

In the second of Monday’s cases, the Court has to decide whether the Biden administration has a basis for suing Texas to enjoin the Texas Heartbeat Act. Solicitor General Elizabeth Prelogar, the administration’s representative in the Supreme Court, said the Department of Justice has a special responsibility to ensure the states respect federal law.

“[The act] is a brazen attack on the coordinate branches of the federal government. It’s an attack on the authority of this Court to say what the law is and to have that judgment respected across the 50 states,” Prelogar said.

A majority of the Court seemed inclined to close the door on the administration’s lawsuit. In essence, some justices were troubled at the prospect of the Justice Department’s suing a state any time it suspects state officials of violating the Constitution.

Chief Justice John Roberts told Prelogar the authority she asserted “is as broad as can be,” and he pressed her to identify limitations. Kavanaugh said the government’s claim is “different and irregular and unusual.” 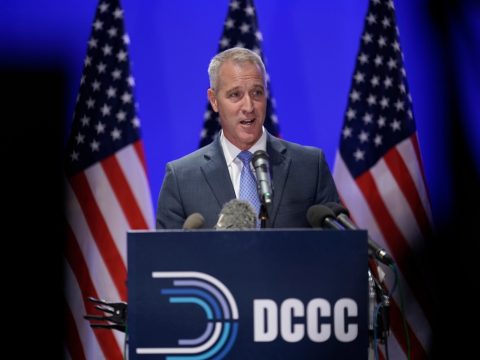 0 16
Mike Lawler: The Red Wave Was Real in New York and the GOP Can Build on It

0 5
CRINGE: Joe Biden Creeps on a Nurse, Repeatedly Asks Her if She Is a Freshman in College (VIDEO)