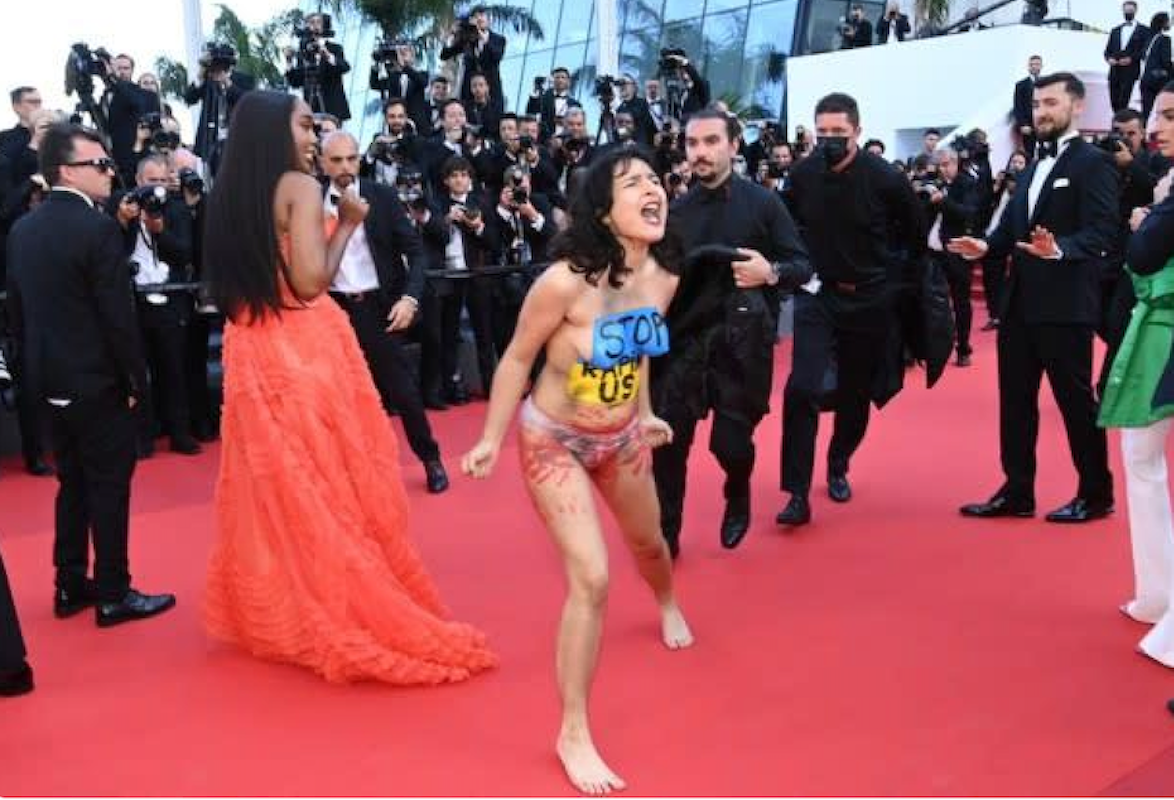 A topless woman with the words “stop raping us” painted on her chest shocked the crowd at Cannes when she crashed a red carpet event Friday.

The incident occurred during an event for the new film “Three Thousand Years Of Longing.” The woman, who wore only underwear, had blue and yellow paint on her body and the name of a radical feminist group on her back, prompting speculation the protest may have been connected to the ongoing Russian invasion of Ukraine.

“Don’t rape us!” the woman yelled as she dropped to her knees before security guards threw a coat over her and dragged her away.

A New York Times reporter recorded part of the chaotic scene before being blocked by authorities.

“On the Cannes red carpet for George Miller’s new movie, the woman in front of me stripped off all her clothes (covered in body paint) and fell to her knees screaming in front of photographers,” wrote Kyle Buchanan. “Cannes authorities rushed over, covered her in a coat, & blocked my camera from filming,” he wrote in a tweet, describing the incident.

On the Cannes red carpet for George Miller’s new movie, the woman in front of me stripped off all her clothes (covered in body paint) and fell to her knees screaming in front of photographers. Cannes authorities rushed over, covered her in a coat, & blocked my camera from filming pic.twitter.com/JFdWlwVMEw

The woman, who had stripped off her clothing moments before creating the ruckus, also had red paint pouring from her underwear, red handprints on her thighs, and the word “scum” scrawled on the small of her back. While it was not clear what the protest was about, Russian soldiers have been accused of raping Ukrainian civilians in the war, which began in February.

SCUM is the name of a radical French feminist group that claimed credit for the protest in a tweet.

“A SCUM activist enters the red carpet of the #Cannes2022 festival to denounce the sexual violence inflicted on Ukrainian women in the context of the war,” the group said.

The demonstration came ahead of Cannes’ “Ukraine Day” on Saturday, when the festival will hold a series of events to show solidarity for Ukraine’s film industry.

“Three Thousand Years Of Longing” marks Director George Miller’s first film since “Mad Max: Fury Road” in 2015. It stars Tilda Swinton and Idris Elba and is about a scholar who meets a magician in a hotel room, then discovers his fantastical past while getting to make three wishes.

Miller, Swinton, and Elba walked the red carpet after the protester was hauled away, Variety reported.