Rep. Steve Scalise (R-LA) ripped through the Democrats’ 2,300-page $1.8 trillion Infrastructure Investment and Jobs Act before a vote by the entire U.S. House of Representatives on Friday night.

Scalise criticized the Democrats for rushing this bill to vote before the Congressional Budget Office (CBO) scored it and for including things unrelated to infrastructure. This includes proposals for mass amnesty, increasing the size of the Internal Revenue Service (IRS), and a natural gas tax that will increase energy costs.

It’s a socialist takeover of America.

No wonder they’re doing it in the dark of night. pic.twitter.com/bvZ4v4BJ23

“I rise in strong opposition to the rule but specifically against this massive, multi-trillion-dollar tax and spend bill,” Scalise said. “Of course we just got the text last night — over 2300 pages. And as we’ve been combing through, I’d like to point out a few pieces in this bill.”

Scalise pointed out that the infrastructure bill includes a natural gas tax, which would hit low-income families the hardest. “President Biden promised that anyone who makes less than $400,000 a year won’t spend a dime — will not pay a dime in new taxes. … The only problem is he breaks the promise right here in the bill … A tax that, according to the American Gas Association, will increase household electricity rates by 30 percent,” said Scalise.

The Democrats’ bill includes amnesty for millions of illegal immigrants in the country. Scalise highlighted the timing of this bill with the news that Biden’s administration intends to give illegal immigrants $450,000. “Estimates are seven million more people. Can you imagine the flood that will come over when they hear that you can get a half a million dollars a person if President Biden gets his way?” Scalise questioned. 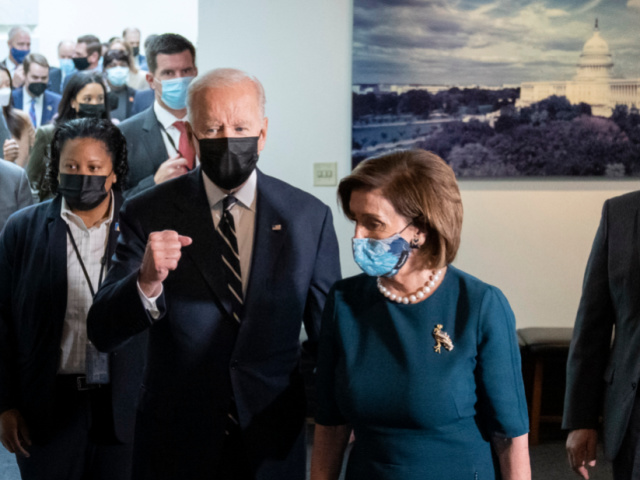 U.S. President Joe Biden and Speaker of the House Nancy Pelosi leave a meeting with House Democrats at the U.S. Capitol on Capitol Hill October 28, 2021, in Washington, DC. President Biden will meet with House Democrats on Thursday morning to try and secure a vote on the Senate-passed bipartisan infrastructure bill and discuss his multi-trillion social policy spending bill. (Photo by Drew Angerer/Getty Images)

When reports surfaced that the administration was planning to give reparations for illegal immigrants, Biden said, “that’s not gonna happen.” However, his own White House walked back his comments. “The president is perfectly comfortable with the Department of Justice settling with the individuals and families who are currently in litigation with the United States government,” said deputy press secretary Karine Jean-Pierre on Thursday.

Scalise ended his floor speech by attacking the Democrats for voting on the bill at such a late hour Friday night. “But these IRS agents are gonna have to account for over $200 billion to find money from your checking accounts. That’s what they’re trying to do at dark of night,” he said. “We started the morning at 8 a.m. We’re here after 9 p.m. starting to get into the details of this bill. No wonder they don’t want a CBO score. No wonder they want to do this by dark of night.” Scalise then warned of the inflationary impact of this bill, saying, “this is going to induce more inflation that’s hurting families all across America.”

All copyrights and legal uses attributed to content are located at the article origination: © Breitbart, Steve Scalise Rips Through 2,300-Page $1.8 Trillion Spending Bill on House Floor

Thank you Steve Scalise for exposing the evils of the left. You care, they do not. I hope this Bill gets shut down at every turn.