Like most celebrities, Rep. Alexandria Ocasio-Cortez (D., N.Y.) doesn’t always play by the rules. Sources inform the Washington Free Beacon that the socialist congresswoman’s white Tesla was parked illegally outside the Whole Foods near her posh apartment complex in Washington, D.C.

Ocasio-Cortez’s office did not immediately return a request for comment on the parking scandal. There is more than sufficient evidence, however, to conclude that the illegally parked white Tesla belongs to her.

The car in the following photographs, taken May 14, had a New York license plate and a congressional parking pass on the dashboard. The Free Beacon has obscured these identifying features in accordance with our anti-doxxing policy. 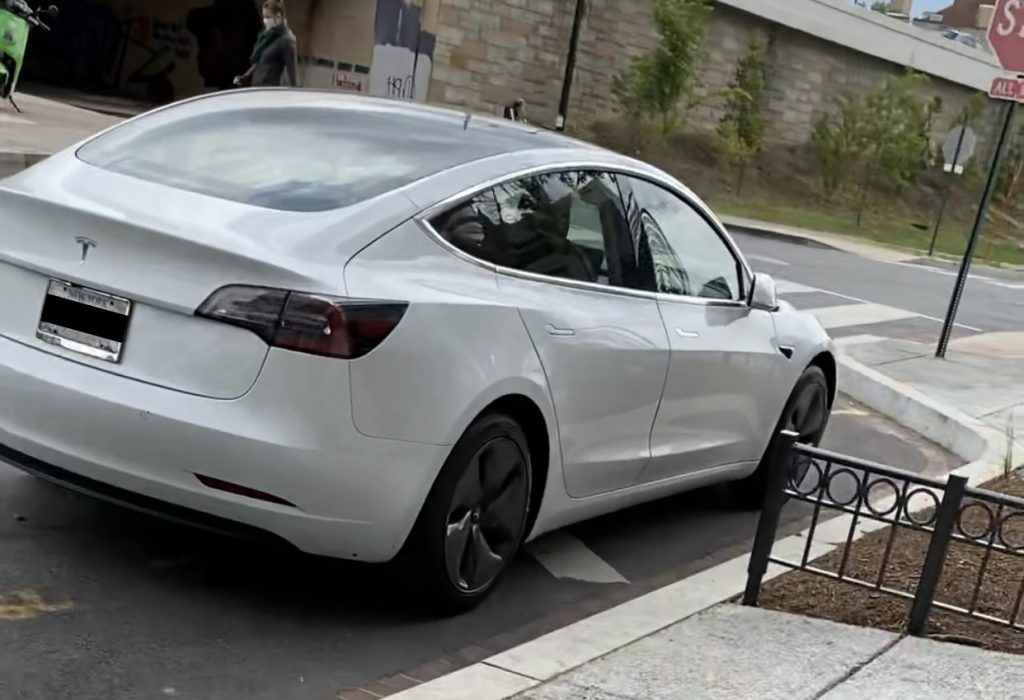 Ocasio-Cortez told Vanity Fair in October 2020 that she “just got a car.” In February 2021, the congresswoman explained that she decided to get a car “due to COVID” and mentioned that it was an electric vehicle in an effort to silence her haters. She also described feeling “very lucky that I have not gotten a parking ticket,” which suggests a willingness to break the rules for her own convenience.

“I usually travel by train, but due to COVID I now drive by car, I travel by car,” Ocasio-Cortez said on Instagram Live. “Not a combustion engine vehicle, but I travel by car between New York and D.C.” 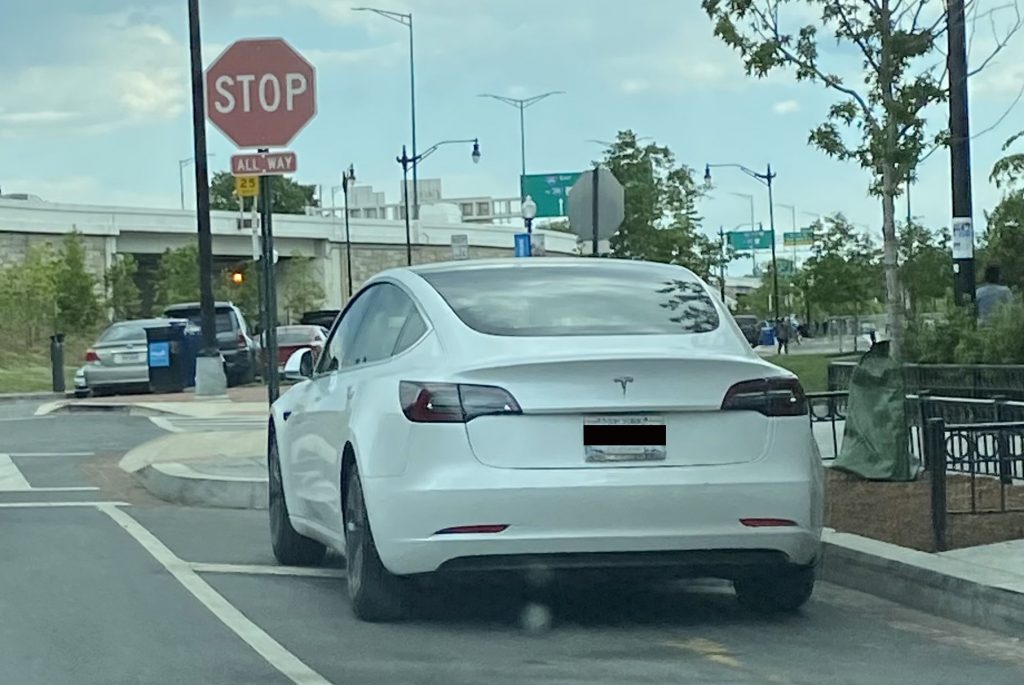 Multiple sources told the Free Beacon they had seen Ocasio-Cortez driving a white Tesla in the district. A member of Congress, who requested anonymity due to the sensitive nature of the subject matter, reported seeing her drive the vehicle into a House parking lot on Capitol Hill.

Additionally, a Free Beacon cartographical analysis determined that the Whole Foods, an élite grocery establishment owned by Amazon, is located within walking distance of the luxury apartment building where Ocasio-Cortez resides. 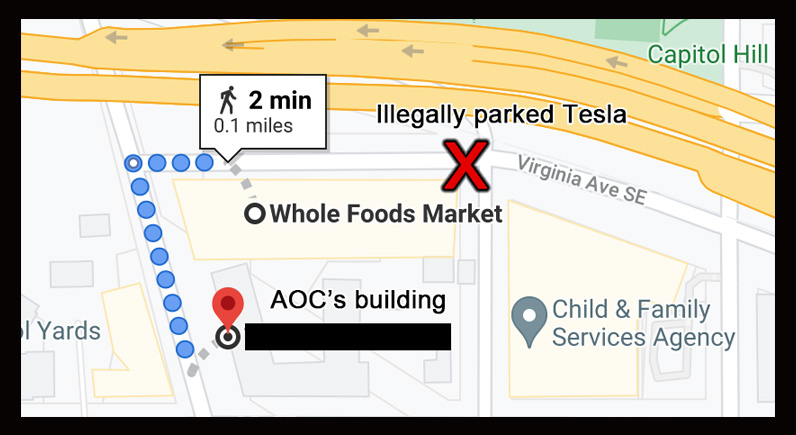 As reported in the Free Beacon, the posh residential complex, where studios rent for more than $2,000 a month, is one of the fanciest in Washington, D.C. Amenities include a climbing wall, several pools, racquetball courts, a golf simulator, a rooftop dog park, a steam room, multiple cycling studios, two types of massage rooms, and charging ports for electric vehicles. Ocasio-Cortez has argued these amenities should be a human right available to everyone.

One source familiar with the parking situation at the Navy Yard Whole Foods described the illegal parking job as “pathetic” because the grocery store offers free parking for its elite customers.

The significance of the parking scandal remains to be seen. At the very least, it could undermine Ocasio-Cortez’s credibility in her ongoing quest to transform the United States into a socialist paradise. Her policy adviser, Dan Riffle, wants to abolish billionaires, yet the congresswoman appears to enjoy consuming the products of their capitalist ingenuity. Tesla, for example, is run by a billionaire (Elon Musk), as is Whole Foods (Jeff Bezos).

In 2018, Ocasio-Cortez attacked Tesla during a climate change town hall hosted by her socialist colleague, Sen. Bernie Sanders (I., Vt.). “For far too long, we gave money to Tesla, we gave money to a ton of people and we got no return on our investment that the public made in creating technologies, and it’s about time we get our due because it’s the public that funded and financed a lot of innovative technologies,” she said.

In 2019, Ocasio-Cortez spearheaded a campaign that ultimately forced Amazon to cancel its plans to build a second headquarters in Queens. After left-wing activists successfully scuttled the proposed headquarters, which would have brought more than 25,000 jobs to the area, the congresswoman declared victory, saying “anything is possible.”

For the time being, AOC remains one of the foremost advocates of ending U.S. aid to Israel and slapping sanctions on the Jewish state. She was widely criticized last week, for example, after suggesting Israel was “an apartheid state.” Ocasio-Cortez was among the Democratic lawmakers singled out for praise in an article published on the Muslim Brotherhood’s online propaganda website. 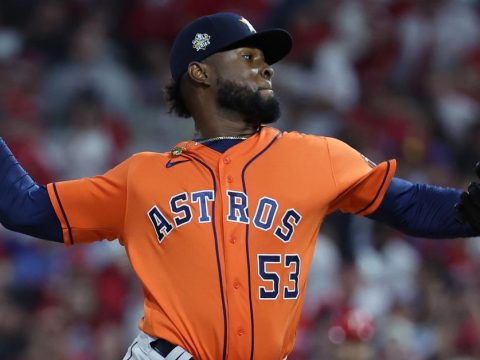 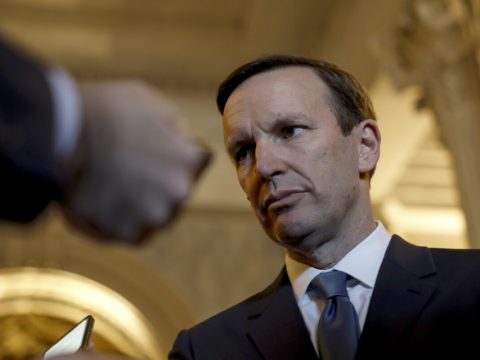 0 25
Trump: We need young people to get involved in politics