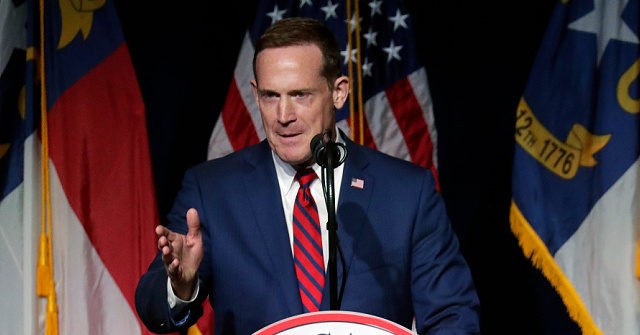 McCrory combined clips from two Budd interviews — a February 26, 2022, Fox News interview and a February 28 interview with a CBS affiliate in Raleigh —  of him discussing Russia’s invasion of Ukraine. The advertisement spliced several of Budd’s statements together that make him appear supportive of Russian President Vladimir Putin. In the video, McCrory accuses Budd of being  “friendly toward Russia” and calling Putin “very intelligent,” before saying that he would never “compliment our enemies”:

McCrory’s ad implied that Budd was forgiving Putin’s actions or attempting to absolve him from blame. However, a review of the full context of Budd’s interviews shows that he also attempted to explain Putin’s motivations, but didn’t endorse or forgive them. Budd said Putin has ‘strategic reasons’ for his actions, but he also called Putin ‘evil,’ ‘erratic,’ and a ‘thug.’ He said he supports Ukraine and he advocated stronger action against Putin.

Budd released a statement via Twitter in response to Russia’s sanctions, calling it a “badge of honor.”

Just learned that I was sanctioned by the Russian government.

I take it as a badge of honor.

International thugs like Vladimir Putin will never intimidate me or the United States of America.

“I just learned that I was sanctioned by the Russia government. I take it as a badge of honor. International thugs like Vladimir Putin will never intimidate me or the United States of America,” the congressman wrote.

“Russia’s unjust and barbaric invasion of Ukraine demands strong action, and that’s why I proudly supported crippling economic sanctions on the Russian government and military arms for Ukraine to help them fight for their freedom,” he said.

Budd, a gun store owner serving his third term in the U.S. House, has previously hit out against Russia. The congressman’s first bill to pass the House was included in former President Donald Trump’s Russian sanctions package in 2017. He has also sponsored multiple pieces of legislation in the last month to get tough on Russia, including the “Prohibition on Imports of Russian Oil Act,” the “Expediting Natural Gas Exports to Allies Act,” and others.

Budd and McCory have been leading the more than a dozen GOP candidates for North Carolina’s U.S. Senate primary set to take place on May 17. McCrory is notably backed by outgoing Sen. Burr —one of the seven Senate Republicans who voted in favor of convicting former President Donald Trump on impeachment charges in 2021. In contrast, Trump endorsed last year, saying Budd will “fight like hell.”

Budd has taken a hefty double-digit lead over McCrory in recent polls, ranging anywhere from ten points to 16 points ahead.

0 21
Japan to confirm size of yen-buying intervention, eyes on size of war-chest