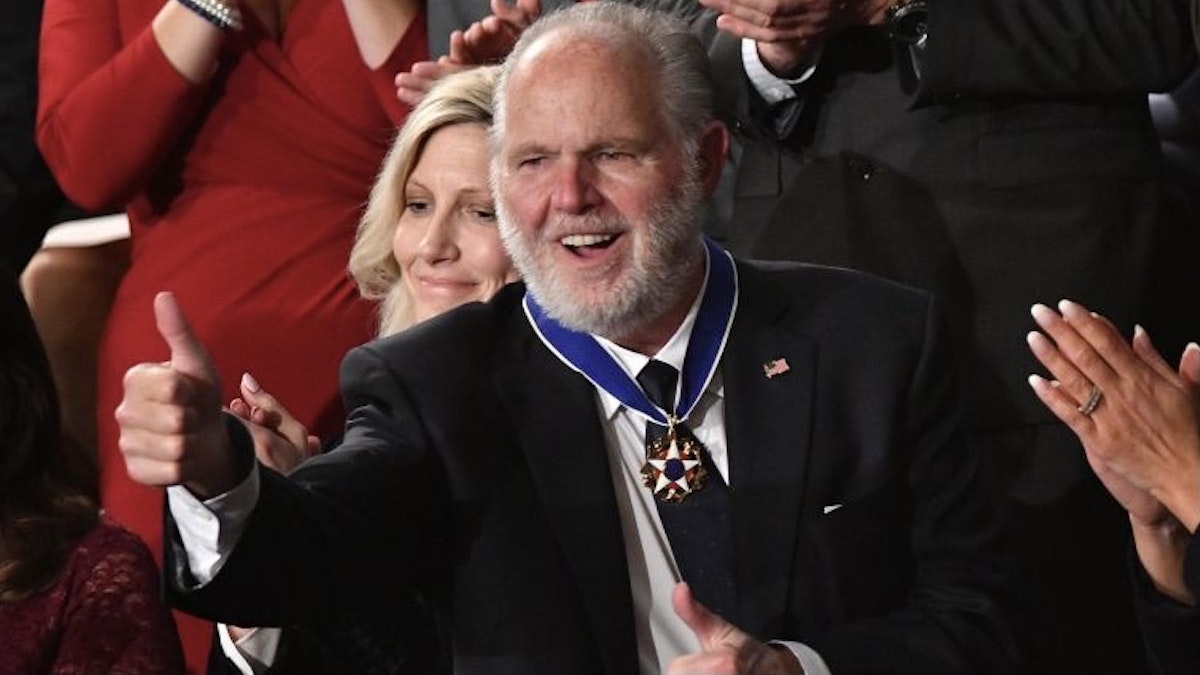 Limbaugh, in a clip of December 2020, asserted that President Joe Biden would “serve at the pleasure of Barack Obama,” predicting that the media would turn on Biden and start to reliably report on the Biden family’s questionable business dealings when Obama and leading Democrats thought he was doing too much damage.

“They cannot be critical of Biden,” Limbaugh said of legacy media on his radio broadcast. “They will not be critical of Biden. They’re gonna prop up Biden until, until — I’m gonna tell you, folks, I think we’re seeing enough information on the Bidens now to safely say that Biden will serve at the pleasure of Barack Obama.”

“If Obama gives the green light to Democrats to take Biden out, there will be ample evidence that Biden has lied about his knowledge his family was selling his name and office with his permission, and if that’s in fact the case, then there’s likely unreported money that will be found,” Limbaugh said.

“If they decide to take Biden out they will have ample evidence, and once the decision is make the fake news media will temporarily become hard news media”
pic.twitter.com/yfr7ZZqCyg

In late March, The Washington Post joined The New York Times in finally “verifying some of the contents pulled off of a laptop belonging to Hunter Biden and abandoned at a Delaware computer store in 2019,” The Daily Wire reported.

Notably, the story, first broken by the New York Post ahead of the 2020 presidential election, was widely dismissed by the mainstream media as fake news and even censored on Twitter:

The confirmations by the major news publications come weeks apart and roughly 18 months after the New York Post broke stories on Biden’s overseas business dealings, citing information from the laptop. The NY Post’s stories, published weeks before the 2020 election, were censored on social media and downplayed as likely products of Russian propaganda. At the time, neither Biden nor his father, now the President of the United States, claimed that the laptop or its contents were fake.

Former President Barack Obama also returned to the White House this week as Biden gets clobbered in the polls.

Daily Wire Editor Emeritus Ben Shapiro suggested Wednesday that it was a poorly-calculated attempt to save President Biden.

“The supposedly reason why Barack Obama was going back to the White House was so that Joe Biden could announce moves to strengthen Obamacare,” Shapiro said on his podcast. “But the real reason is because they’re tying to see if some of the magic of Barack Obama can rub off on Joe Biden.”

Shapiro dismissed the apparent effort as futile. “He was a unicorn,” the bestselling author said of Obama, noting that Democrats got “shellacked” in Congress, in the Senate, in the state legislatures, and in gubernatorial races across the country when Obama was in office.

Related: The Criminal Investigation Into Hunter Biden Is Heating Up: Here’s What You Need To Know

Related: White House ‘Stands By’ Claim That Hunter Biden Did Not Profit Off Chinese Business Deals. Docs Show His Companies Made Millions

Related: ‘The Rest Of The Country Is Starting To Open Their Eyes’: Major Outlets Confirm Contents Of Hunter’s Laptop