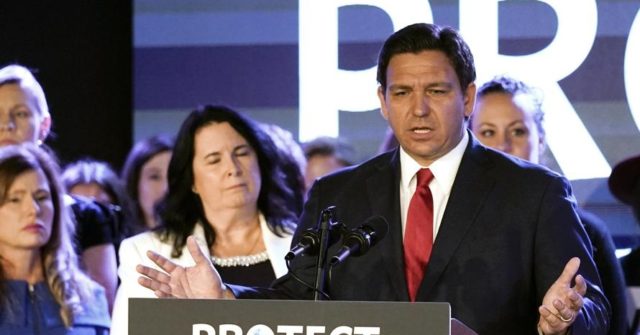 Florida Gov. Ron DeSantis (R) on Thursday sharply criticized members of the far-left who are pushing radical pro-abortion views by justifying abortions performed on babies who are full term, making it abundantly clear that it is “infanticide.”

The governor signed a bill on Thursday banning abortions after 15 weeks of pregnancy, noting that it is “a time where these babies have beating hearts” and can move, taste, see, feel pain, and suck their thumbs.

But some, the governor said, are continuing to push radical pro-abortion views, fighting to allow the murder of babies, even up to full term — something DeSantis made clear is “infanticide.”

“And if you look what’s going on in certain segments of our society, particularly amongst people who are affiliated with the far left of our political spectrum — of course, that’s overrepresented in places like Hollywood, in the media and obviously in one of our major political parties — but they are now taking the position that babies can be aborted up to the ninth month,” he said before explaining further and noting that some of the most “significant” experiences of people’s lives — including his own — are holding their child for the first time.

“What they would say is parent holding that child, if you just go back a day or two, then you would have been able to snuff the child out entirely,” DeSantis said.

“That is just fundamentally wrong. That is infanticide, and that has no place,” he said, explaining how that “mindset has led to things that really shocked the conscience in our society.”

“We just saw this terrible scandal in Washington D.C.,” he said, referencing the news of left-wing pro-life activists discovering the remains of 115 aborted babies, five of whom may have been aborted or killed after birth.

As Breitbart News detailed in part:

“At the bottom of the box was a clear plastic bag with five more containers. One much bigger than the remaining four. Lauren reached into the largest bucket and removed the remains of a beautiful, intact and nearly full-term baby boy we named Christopher X,” Bukovinac continued. “I think I can speak for both Lauren and I when I say this was the most devastating and soul-crushing experience of our lives. Not even years of anti-abortion advocacy could have prepared us for that moment.”

Bukovinac said they found four more late-term aborted babies with “a range of injuries, including a fully intact girl we named Harriet, who had one eye open and an incision in the back of her neck, her brain suctioned out and her skull crushed.”

“Because of this admission, and the advanced gestational ages of these babies and their intact condition, the likelihood that some were born alive is undeniable,” she continued. “Additionally, the injuries sustained by Harriet strongly imply she was the victim of a partial birth abortion.”

“They found all these remains of babies and they found five who were basically infants premature. They would have been, but they would have been able to survive, you know, outside the womb. And yet Washington D.C. is treating that just like we would treat the trash from our lunch or something like that,” DeSantis said.

He concluded by adding it is “really horrifying to see that that could go on in our country, but particularly in our nation’s capital.”

0 13
US to Host Virtual Meeting on Tuesday of Indo-Pacific Trade, Economic Ministers