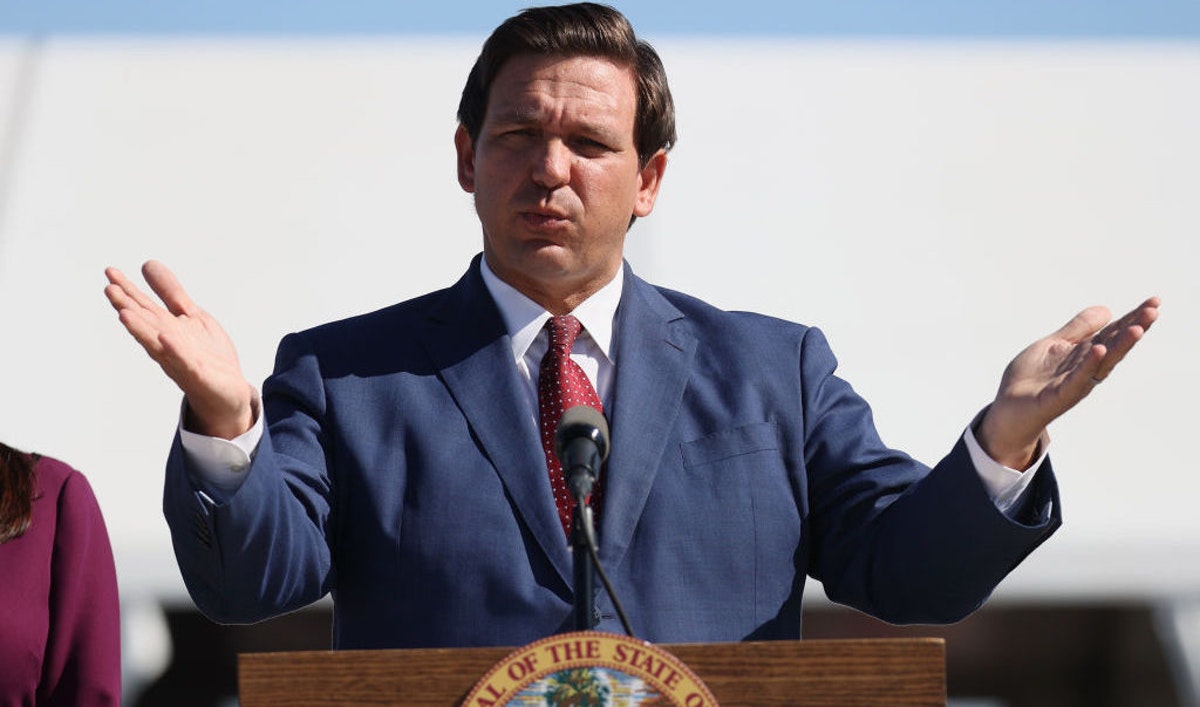 Florida Gov. Ron DeSantis defended himself after he was photographed at the Super Bowl on Sunday not wearing a mask.

“Someone said, ‘Hey, you were at the Super Bowl without a mask’ … but how the hell am I going to be able to drink a beer with a mask on? Come on. I had to watch the Bucs win,” DeSantis told Politico reporter Marc Caputo.

Caught DeSantis before he left an event and he brought up this picture on his own by saying, “Someone said, ‘hey, you were at the Super Bowl without a mask’ … but how the hell am I going to be able to drink a beer with a mask on? Come on. I had to watch the Bucs win.” https://t.co/OEDAeW2eGM

The photo shows DeSantis speaking to someone in the seat next to him in a suite in Raymond James Stadium. DeSantis does have a drink in front of him, though it appears to be a diet Pepsi. The governor’s hands are not visible in the photo.

Prior to the championship game, Tampa Mayor Jane Castor issued a largely voluntary executive order directing people to wear masks, even while outdoors, according to the Orlando Sentinel. Castor issued the order in an attempt to cut down on the number of maskless people celebrating or out after the game.

“He is, of course. concerned when there are pictures and photos — we all are — that show many, many people without masks in close distance with one another at the height of a pandemic,” Psaki said at a Monday press conference.

A number of controversies besides those involving masks popped up during and after the game. Brittany Matthews, the fiancé of Kansas City Chiefs quarterback Patrick Mahomes, and Mahomes’ mother slammed the sports network ESPN for sending a pair of tweets appearing to mock the quarterback during the Super Bowl. As The Daily Wire reported:

As the game ended and the Buccaneers went to collect the Vince Lombardi Trophy, Matthews blitzed ESPN for tweeting several images of Mahomes looking shocked and annoyed during the game.

“Cool ESPN, love the support of a major sports platform for one of the best players in the league,” Matthews said, with an additional reference appearing to call the network corny.

“Y’all are [trash] for this too, but he looks damn good to me,” she continued.

After swatting down ESPN, Matthews got a little more lighthearted towards the end of the night, looking forward to her future with the Kansas City quarterback. Mahomes and Matthews are due to have a baby soon after announcing Matthews was pregnant in September.

“Not how we wanted it to end, but 15 played his heart out and I’m always and forever proud of him in everything he does!” she said. “Now let’s have a baby.”

Mahomes’ mother, Randi, joined Matthews in smacking the sports network over the tweets of her son looking discouraged during the game.

“Love our chiefs!! Heartbroken to see how [ESPN] and [SportsCenter] tried making fun of my son,” she wrote on Twitter. “But [I] know his heart and love for his team and chiefs nation! Thank you chiefs fans.. don’t forget these are someone’s sons tv #godisgreaterthenmyhighsandmylows.”

.....Continue  at The Daily Wire, Ron DeSantis Addresses Maskless Super Bowl Photo: ‘How The Hell Am I Supposed To Drink Beer’