Five current or former employees of the IRS have been charged with scheming to defraud hundreds of thousands of dollars in COVID relief.

The Department of Justice announced in a press release Tuesday that the five individuals had each been charged with separate counts of wire fraud after they defrauded the federal Paycheck Protection Program (PPP) and Economic Injury Disaster Loan (EIDL) program, which provided economic relief to small business owners and individuals affected by the COVID pandemic. The fraudulent loans ranged from as little as $11,000 to more than $170,000.

“These individuals – acting out of pure greed – abused their positions by taking government funds meant for citizens and businesses who desperately needed it,” U.S. Attorney for the Western District of Tennessee, Kevin G. Ritz, said in a statement. “I thank our law enforcement partners for rooting out this fraud. Our office will not hesitate to pursue and charge individuals who steal from our nation’s taxpayers.”

The first suspect was employed by the IRS as a Program Evaluation and Risk Analyst in the Human Capital Office. According to the criminal indictment, the suspect filed four fraudulent EIDL applications, seeking more than $500,000 in funds; he received a total of $171,400 in funds. The suspect allegedly spent the relief money on a Mercedes-Benz and placed the rest of his funds into a personal investment account. He is charged with two counts of wire fraud and an additional two counts of money laundering.

The second suspect worked for the IRS as a contact representative in the Wage and Investment Service Centers Department. According to the indictment, she allegedly sought at least $32,500 in loans from multiple PPP and EIDL applications; she received $11,500 in funds. She spent the funds on manicures, massages, and luxury clothing. She also obtained more than $16,050 in fraudulent unemployment insurance benefits from the Tennessee Department of Labor. She is charged with three counts of wire fraud.

The third suspect worked as a Management and Program Assistant in Information Technology. According to the DOJ, she allegedly submitted EIDL applications for a fashion business, seeking more than $300,000 in loans and obtaining $28,900. She allegedly spent the loan funds on Gucci apparel and a vacation in Las Vegas. She plead guilty to one count of wire fraud Tuesday.

The fourth suspect worked as a Contact Representative in the Wage and Investment Service Centers Department. He allegedly applied for four PPP and EIDL loans, seeking more than $113,000; he received $66,666 in funds. He allegedly spent the money on a Gucci satchel and other personal items. He plead guilty to a single count of wire fraud in August.

The fifth suspect worked as a Lead Management and Program Assistant in the Human Capital Office. She allegedly applied for four PPP and EIDL loans, seeking more than $133,000 in loans; she received more than $123,000. She then allegedly spent the funds on jewelry and trips to Las Vegas. She also plead guilty to one count of wire fraud in July.

The five IRS agents are just the latest in a cast of characters convicted of millions of dollars in COVID-related fraud in 2022 alone. So far this year, twin brothers in Maryland, a pair of New Jersey residents, hundreds of foreign nationals from Nigeria, Pakistan, Mexico, and India, a convicted murderer serving a life sentence, an illegal alien, and the Red Power Ranger have all been prosecuted for COVID fraud. 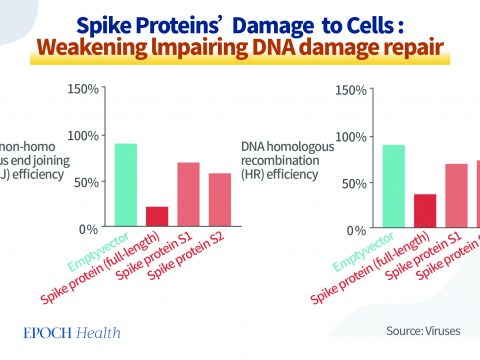 0 81
Is the Spike Protein Changing Our Gene Expression?

0 5
Gavin Newsom’s Wife Posts, Deletes Tweet As Governor Has Not Been Seen By Public For Nearly 2 Weeks