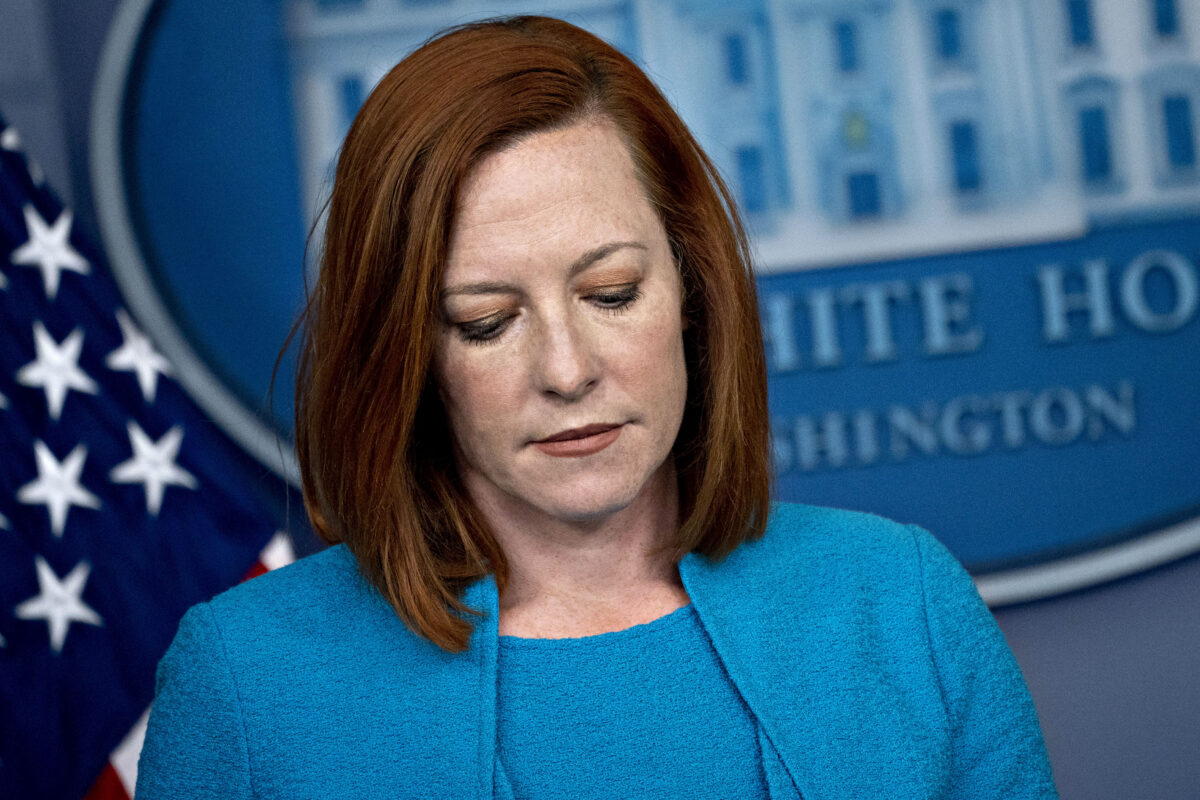 “One of the options that’s being reported over the weekend is spending $86 million on hotel rooms for some migrants and feeding them,” a reporter said. “How did you square that with the National Guard troops who were sleeping in parking garages, and some of them got sick from having contaminated food?

“That’s a disparity a lot of people are pointing out, that our National Guard was treated one way and then illegal immigrants are going to be put in hotel rooms,” the reporter added.

“Well, first, let me say that at the time when we became aware of the conditions National Guard troops were in a parking garages, as you noted, the president called the head of the National Guard that day and offered his assistance, offered to play any role that he could play, boosting morale, asking for more aid, making sure they had the right were treated in the way that they deserved for the incredible role they’ve played,” Psaki claimed. “So I know that was some time ago, but that was the reaction he took at the time.”

DOOCY: So now that border patrol agents in the Rio Grande Valley are letting adult migrants go without even issuing notices to appear, is the Biden administration immigration policy just becoming more on like the honor system?

PSAKI: That is an inaccurate depiction of what’s happening at the border. So there’s no change in policy. The border remains closed. Families and single adults are being expelled under Title 42 and should not attempt to cross illegally. In the narrow, narrow circumstances in which families can’t be expelled, the family is tested and quarantined as needed and placed in immigration proceedings to commence. In some cases, families are placed in removal proceedings further along in the release process. So if families are going to be deported and they’re awaiting deportation, they don’t need a court date and they don’t need a notice to appear because it has already been determined that they will be sent back to their home countries. Sometimes that takes a minute to ensure there is proper transportation and steps in place to do that.

PSAKI: Well, again, there are limited cases where there are families, because they can’t be held in Mexico, who are processed, tested, considered at the border. Most of them are sent back to their home countries. Those are very limited cases and it’s certainly not a depiction of the overarching policy.

DOOCY: Okay. Two years ago, President Biden said, “We’re a nation that says you want to flee and you’re fleeing opposition, you should come. They deserve to be heard. That’s who we are.” Now he says, “I can say quite clearly, don’t come over.” So why was his position different campaigning than it is governing?

PSAKI: Well, I think that sometimes there’s language that is used by some that is not including the full context of his comments. I will say that he still believes that he wants our country to be a place where there is asylum processing at the border, where people are considered and go through a proper process who are fleeing prosecution, who should be considered for immigration status. That is a process that is broken. It was broken by the last administration and he wants to put in place a process through an immigration bill, through steps taken by our Department of Homeland Security and HHS to improve that process and make it safe, efficient, and effective. We’re going to need some time to do that.

DOOCY: And the President says, you told us yesterday, “I know what’s going on in these facilities.” You say that he’s been briefed with photos from the inside.

PSAKI:  Multiple times. … He’s been briefed multiple times about immigration and often has regular sets of questions for his teams.

DOOCY: So what is his concern about this being a super spreader event where you’ve got 400 kids stuffed into a pod built for 260?

PSAKI: These kids are tested. If they need to be quarantined, they are quarantined. We also follow CDC guidelines to ensure that they are kept safe. One of the reasons that it took us some time to have some of these facilities or some of the shelters open to a larger groups of kids is because we wanted to follow those CDC guidelines. So we certainly don’t see it through that prism. We actually took the steps we did to keep these kids safe.

DOOCY: But where else in the country would it be okay to have 400 people in a space for 260 during the pandemic?

PSAKI: Well, again, Peter, we are closely following the CDC guidelines. That’s why we’re opening up additional facilities, why they’ve been at limited capacity in a number of these shelters.

DOOCY: But if I may, I don’t know that there are CDC guidelines that say you can be open for 400-

DOOCY: No, the border patrol facilities.

PSAKI: Apologies. I was misunderstanding your question. Look, I think our objective is to move … This is one of the reasons this is such a focus every single day for the President and this administration. We want to move these kids as quickly as possible through these facilities and into the shelters where there is safe spacing, and then move them into homes where there is safe spacing. And we are concerned about the public health impact. That’s why we’re putting in place a number of policies to expedite these processes.

DOOCY: But at that first stop, it’s just not happening. And that is part of the federal government that you guys are in charge of.

PSAKI: Well, again, I think I’ve outlined, for you specifically even, a number of steps that we have taken and we are taking to expedite processing at the border, to ensure we’re expediting the timeline, because these border patrol facilities are not made for children. We want to move them in part because of COVID, in part because they’re not places that have the educational, the health resources and other resources that we believe these children should have access to. That’s where all of our focus is on and why we’re working to expedite things. We have a plan for implementing it and we’re confident we’re going to be successful. We just have limited time. So I just want to … Go ahead.

0 6
GOP Rep. Cammack: 'Hypocrisy at Its Finest' to Kill Title 42 While House Still Proxy Votes Due to COVID

0 9
Airbnb Blacklists Every Russian And Belorussian