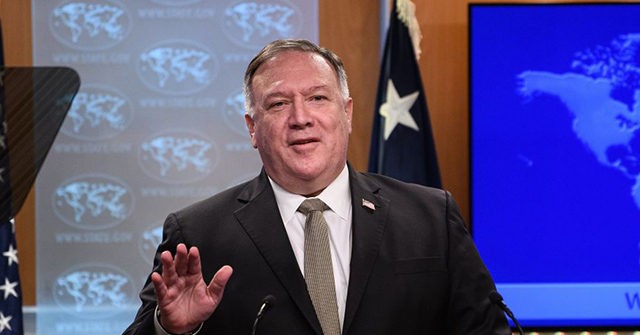 Sunday on New York WABC 770 AM radio’s “The Cats Roundtable,” former Secretary of State Mike Pompeo urged President Joe Biden and other Western countries to “stand up” to the Chinese Communist Party.

Pompeo voiced his “regret” that the International Olympic Committee and others haven’t pushed to move the upcoming Winter Olympics out of Beijing.

“The West needs to stand up and be direct and impose real costs on [China] as they attempt to bully and coerce ordinary, good peace-loving human beings all across the world,” Pompeo told host John Catsimatidis.

He added, “I so regret that the world — the International Olympic Committee — didn’t move these games out of this place.”

Pompeo went on to lament that the games would elevate Chinese President Xi Jinping.

“I think the games are going to go forward,” he stated. “Corporate America, frankly, who is supporting these games this man, Xi Jinping, who is holding more than a million people in internment camps during the Olympic games, will be stage-center, high, noted, famous, and he will be bolstered. I really, truly do regret it. And I think, John, as we look forward to 2022, one of the places that we could most readily have a military confrontation is, in fact, with the Chinese Communist Party, with Xi Jinping, in the Straits of Taiwan.”