White House Press Secretary Karine Jean-Pierre has had a lot of issues in the job. While it often seems that the job under Joe Biden is to avoid answering the question, Jean-Pierre not only does that, but she does it in such a terrible fashion that everyone knows that’s exactly what she is doing.

Democrats have been particularly deceptive when characterizing Sen. Lindsay Graham’s abortion restriction proposal which involves banning the procedure past 15 weeks except in cases of rape, incest, and dangers to the life of the mother. This restriction tailors with what most Americans are in favor of.

Jean-Pierre was characterizing it simply as a “nationwide ban” on abortion in a battle with Fox’s Peter Doocy, without noting the 15 weeks part.

Doocy: And your position on his plan is…15 wks is unacceptable?

KJP: I was speaking to…what Republicans are trying to do. pic.twitter.com/xpuFEpyVdC

Listen as she continues, saying she refused to “get into the specifics.”

KJP: “It’s a national ban, which will take us backwards & will put at risk the health of women…We’re talking…privacy…contraception…marriage. That is what extreme [GOP] officials are trying to do. I’m not going to get into specifics.” pic.twitter.com/pQ75xoT72p

Because if you did get into the specifics, you couldn’t deceive the American public about what the proposal was. If you’re claiming that what Republicans are proposing is too extreme, what are you proposing?

Doocy wouldn’t let her off the hook. He demanded to know what Biden’s proposed restriction would be or if he had no restrictions at all on abortion.

Doocy: Why not get into specifics? The Republicans are saying we don’t want abortion after 15 wks. Why can’t you say how many weeks [Biden] thinks the limit is?

KJP: As you know, Kevin McCarthy put out the GOP agenda

Doocy: “How many weeks?”

KJP: “I’m answering your question. What Republicans are trying to do is take us backwards. They’re trying to take away the rights & freedoms of Americans. That’s what we’re calling out…We should really listen to what [they] are trying to tell us” pic.twitter.com/LAahis9k2q

Then she lied and insisted that she had answered his question when she hadn’t.

Doocy: We are all covering the Republican plan…[W]hy can’t you say how many weeks for Biden?
KJP [to another reporter]: Okay, go ahead.
Doocy: No.
KJP: No…I answered your question.
Doocy: You did not answer my question.
KJP: I did. I did.
Doocy: Why can’t you say–

Good for Peter Doocy going after her and exposing their lies and refusal to be straight with the American people.

The exchange shows just how extreme Biden and the Democratic position is. Even when you ask, they refuse to put any restrictions at all on it so it effectively means it’s cool up to birth to then. They don’t want to say that because most Americans would be against that. However, if they refuse to give a restriction, then that’s what they are effectively saying — they have no restrictions. 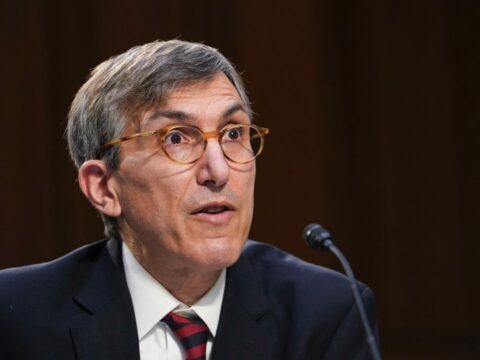