The Coast Guard and Border Patrol apprehended hundreds of Haitians attempting to enter the country illegally after finding their overcrowded sail boat stranded off the shore of Key Largo Saturday.

Border Patrol rescued 113 migrants who had abandoned the ship and the Coast Guard detained the remaining 220 who stayed on board. Migrants were taken to a nearby country club and given snacks, water, and dry clothes. Four migrants were treated at a nearby hospital for dehydration, with several others being treated on scene. A Border Patrol official told NBC that the operation was likely organized by smugglers.

Human smugglers have made numerous attempts to traffic Haitians and other people from the Caribbean into the United States in the past year. During a similar incident last month, over 150 Haitian migrants were captured. A massive vessel containing 842 Haitians was headed for the United States in March, though ultimately ended up in Cuba. Between January and June, law enforcement has stopped roughly 40,000 Haitians from entering the country.

Experts say political instability following the assassination of Haitian president Jovenel Moïse last year is driving the exodus of migrants. As state capacity has continued to degrade in Haiti, gang violence has worsened with women and children often becoming targets of violence.

As illegal entries soared at the southern border last year, the Biden administration reinstated former president Trump’s “Remain in Mexico” policy following a court order. Despite this, Biden still advocates a pathway to citizenship for individuals residing in the United States illegally.

“The smugglers have no regard for migrants or their lives,” he continued. “The more migrants they put onboard their boat, the more money they make.” Thousands of migrants have died attempting to cross the border since Biden took office, with smugglers being involved in many of those deaths.

Officials say that those who attempted to enter the country illegally will be transferred into the “immigration process.” 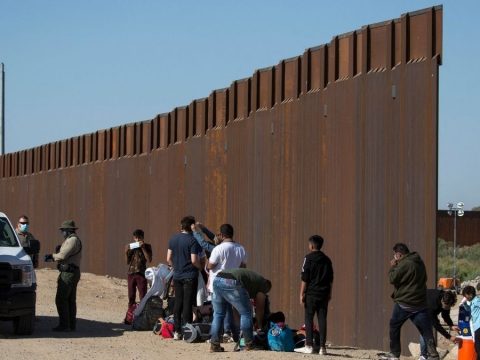