Kansans head to the polls Tuesday to vote on the proposed “Value Them Both” constitutional amendment that seeks to overturn the Kansas Supreme Court’s decision in Hodes & Nauser v. Schmidt that declared that the state constitution guarantees a “fundamental right to abortion.” Many Kansans may not realize, however, that the votes they cast on Tuesday may have been heavily influenced by out-of-state abortion apologists who contributed a whopping 71 percent of the $6.54 million spent by the lead group campaigning against the amendment.

The proposed Value Them Both amendment passed the Kansas House and Senate in January 2021 by the two-thirds threshold required under the state constitution to place the proposal on the ballot for the citizens of Kansas to decide. The amendment would overturn Hodes’ holding that a state constitutional right to abortion exists by adding to the Kansas Bill of Rights a section defining the propriety of abortion regulation, stating:

“Because Kansans value both women and children, the constitution of the state of Kansas does not require government funding of abortion and does not create or secure a right to abortion. To the extent permitted by the constitution of the United States, the people, through their elected state representatives and state senators, may pass laws regarding abortion, including, but not limited to, laws that account for circumstances of pregnancy resulting from rape or incest, or circumstances of necessity to save the life of the mother.”

At the time of the Hodes decision, Roe v. Wade and Planned Parenthood v. Casey remained the law of the land under the federal Constitution. Pro-life Kansans nonetheless responded to the opinion by pushing for the Value Them Both amendment for two reasons.

First, the Kansas Supreme Court’s Hodes opinion created a so-called right to abortion even broader than the then-controlling right established in Roe and tweaked in Casey — a state constitutional right so expansive it would guarantee a right to taxpayer-funded abortions.

Second, pro-life Kansans wanted to ensure that if the Supreme Court overturned Roe and Casey, its legislature would regain the right to regulate abortions. While opposition to the amendment by Kansas’s supposedly pro-life Democrat lawmakers initially delayed the state legislature’s approval of the Value Them Both amendment, early last year, the proponents of the amendment garnered the votes necessary to put the proposal on the August primary ballot, which occurs tomorrow.

But then came Dobbs, in which the United States Supreme Court overturned Roe and Casey and held there is no federal constitutional right to abortion. The Dobbs decision makes the outcome of Tuesday’s vote crucial to the question of whether Kansans will now be able to decide on the appropriate regulation of abortion through their elected officials or whether it will be a Midwest abortion haven.

While politicians and pundits see the outcome of Tuesday’s vote on the Value Them Both amendment as registering the pulse of the public on abortion policy, the disparity in out-of-state money flooding the airwaves with the deceptive talking points of abortion apologists, and the reality of the actual issue on the ballot, render the outcome less prophetic then billed.

For the period of January 1, 2022, through July 18, 2022, campaign finance reports summarize the source of donations to the two competing campaigns. The Value Them Both Campaign, led by Kansans for Life, Kansas Family Voice, and Kansas Catholic Conference, supports passages of the amendment, while a group calling itself Kansans for Constitutional Freedom heads the anti-amendment campaign.

One would think Kansas politicians would resent such out-of-state influence, but rather than condemn the outsiders’ interference in a matter of state law, Kansas Democrat Sen. Cindy Holscher attacked Catholic churches and dioceses in Kansas for donating money to support the Value Them Both Campaign. In a Friday op-ed for the Kansas City Star, titled “Kansas Constitutional Amendment on Abortion is a Bailout for the Catholic Church,” Holscher argued the church doesn’t “value them both.” “No,” she wrote, the support for the amendment “is the church valuing its bottom line.”

Beyond Holscher’s dizzying logic and nonsensical thesis that Kansas Catholic churches want to ban abortion in their state so they won’t lose more pro-abortion parishioners — yes, that truly is her argument — the Kansas senator completely ignores the donations made by the Planned Parenthood Action Fund ($850,000) and Planned Parenthood Great Plains Votes ($492,000) to the Kansans for Constitutional Freedom campaign. Now there you have a money motive.

Even more appalling is the false framing of the amendment Holscher posed in her op-ed, inaccurately claiming that “the Legislature currently has the power to pose limits on abortion. To date, there are dozens of restrictions. What the Legislature can’t do is ban the procedure, as the Kansas Constitution currently guarantees access. That’s what this amendment is about, contrary to the confusing language that appears on the ballot.”

It is not the ballot’s language that is confusing, however, but rather the spin put on the Value Them Both amendment by Holscher and her fellow Kansas Democrats. As the Democrats know full well, a state constitutional guarantee to abortion “access” means virtually every law passed by the legislature will be declared unconstitutional by the state courts. Waiting period: struck. Parental notification: struck. Informed consent provisions: struck. But taxpayer funding of abortions to ensure “access” for poor women — that will be required. Conversely, the passage of the amendment merely means that the authority to regulate abortions will be returned to the legislative branch, where it rightly belongs.

Many of the political advertisements funded by out-of-state donors repeat the same false claims about the Value Them Both amendment as peddled in Holscher’s Friday op-ed. And it is not merely the Planned Parenthood types flooding Kansas with money in the hopes of defeating the amendment. An out-of-state billionaire heiress who promotes left-wing causes contributed 15 percent of the total raised by the anti-amendment group, or $1,000,000. A further 23 percent of the donations to the anti-amendment Kansans for Constitutional Freedom campaign came from liberal super-PACS, including groups that the Atlantic and Politico have classified as leftist dark-money networks, such as the 1630 Fund and the North Fund. North Fund “operates an umbrella group for various left-of-center advocacy organizations and has spent millions to promote causes” that included “opposing a 22-week abortion ban.”

With such huge influxes of cash from outsiders, those pushing to defeat the Kansas amendment have been able to blanket the airways with distortions about the legal import of the Value Them Both amendment. And according to Danielle Underwood, the director of communications for Kansans for Life, “out-of-state, radical activists and politicians in Washington, D.C., are trying to force their extreme pro-abortion agenda on the people of Kansas.” “These unwelcome intruders include the Biden administration and far-left congressional members like Nancy Pelosi and Elizabeth Warren,” Underwood told The Federalist, and they “do not represent the people of Kansas or our values.”

“At this critical moment,” Underwood added, “Kansans can and must fight back against outside interests’ aggressive tactics by voting ‘yes’ on the Value Them Both Amendment. It is the only way to safeguard the common-sense abortion limits we already agree on and show the world our state believes in protections for both women and babies.”

Kansas voters may not recognize the outside influences in play, however, but if they take the time to actually read the proposed amendment before marking their ballots tomorrow, they’ll realize that the “no” side of the debate has been lying to them for the last year-and-a-half. Or Kansas voters can instead learn the truth the hard way when, once the amendment has been defeated, abortion activists turn to the state courts to start striking the current abortion regulations on the books and obtain taxpayer-funded abortion. Conservative Kansans will then learn what so-called “abortion access” really means.

Correction: This article has been updated to reflect that the reporting period during which the anti-amendment group raised $6.54 million was approximately a half-year, not one-and-a-half years. 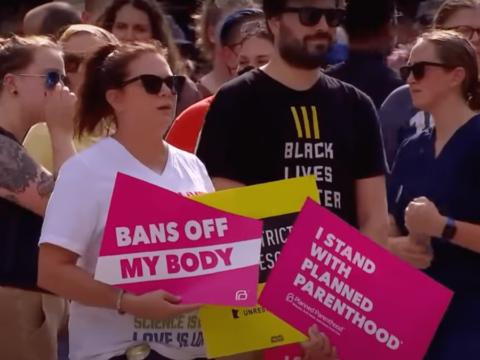 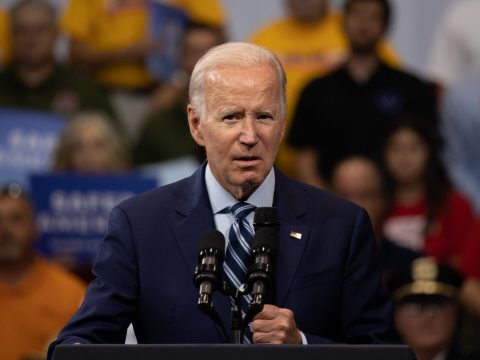