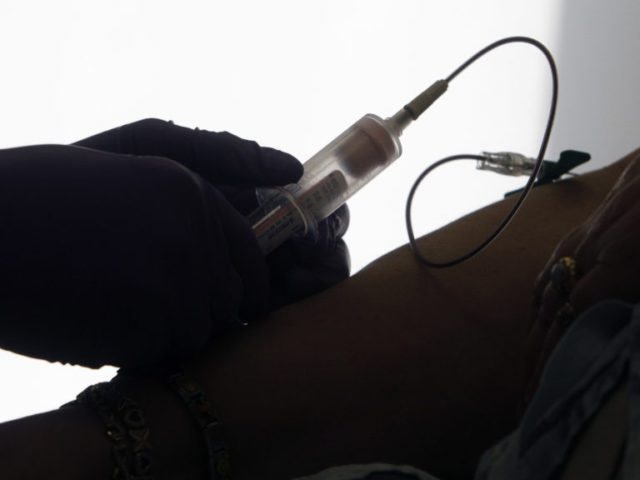 A woke medical student was suspended after publicly celebrating the injury of her patient.

Late last month, Kychelle Del Rosario, a fourth-year student at Wake Forest University’s School of Medicine, bragged in a tweet about how she was drawing blood from a patient. But after the patient laughed at her “She/Her” pronoun pin, Del Rosario added, “I missed his vein, so he had to get stuck twice.”

In the statement announcing the decision to suspend this sociopath (or put her on leave), Wake Forest admitted the incident had occurred but that Del Rosario implying she deliberately hurt the patient is inaccurate:

“Wake Forest School of Medicine has completed a thorough review of the patient encounter with our medical student who recently made an inaccurate statement on social media,” the school wrote in a statement to ‘Tucker Carlson Tonight’ producer Gregg Re on Friday.

“The review determined that the student had no intention to harm the patient and followed Medical Center protocols The School and the student have agreed upon her taking an extended leave. During this time the student will not participate in any patient care activities.”

Sadly, according to the Daily Mail, several of Del Rosario’s fellow students defended her and cheered her on. “[F]ellow students rallied around her and slammed the victim, with another future doctor, Ewen Liu,  even claiming the missed injection was ‘karma-tic’ for him mocking her.”

“During this encounter,” she wrote, “I never intended to harm the patient. I am truly sorry for poorly representing our school and our health system.”

Whether she deliberately did this or not is not the point.

The point is that this amoral sociopath bragged about mishandling and injuring a patient simply because he had his own opinions about pronouns.

And you know, you just know, she wears that pin to provoke people—the wearing of that pin all about being smug and in-your-face.

Two professions will destroy our society if they become this partisan. The first, obviously, is the medical profession. The whole idea behind “First, do no harm” is to remove all biases from the medical profession. You help those who need help regardless. You first help those who need help the most regardless. You remove your politics, race, nationality, patriotism, or whatever else will get in the way of doing your duty.

But this wicked woman went even beyond that. She thought it was worth bragging about injuring a patient and being the cause of him getting stuck twice. Why? Because the patient holds a certain political opinion.

Let me also add that it’s a tad hard to believe a fourth-year medical student would still be having trouble drawing blood.

The second profession is the legal profession. Everyone — and I mean everyone, including the most guilty murderers and rapists imaginable — deserves the best defense possible from a lawyer who is, despite their own beliefs, 100 percent loyal to this client.

There is a bigger moral world than your politics or anything else when it comes to treating the sick and representing a client’s interests in civil or criminal court.

We should all be terrified of this up-and-coming generation of health care professionals when a fourth-year medical student feels she can boost her standing among her peers by bragging about injuring her own patient.

Doctors and lawyers who betray their patients and clients are the scum of the earth.