People who fled New York City during the coronavirus pandemic to live with relatives or to second homes are returning, driving up rental prices and ending the hopes of young people who want to live in their own apartment.

The New York Times spoke with some of those tenants, including Chelcie Parry, who rented a studio for $1,750 in January 2021. On April 1, the rent went up to $3,450 — almost double from what she had been paying — and she had to leave.

The Times reported on the housing market in the city:

Since this time last year, New York City rents have risen 33 percent, nearly double the national average, according to the online listing site Apartment List. In affluent neighborhoods, it’s worse: at the height of the pandemic, in Williamsburg in Brooklyn and on the Upper West Side of Manhattan, for example, the median asking rent fell about 20 percent. Since January 2021 it has charged upward by about 40 percent in both places, according to StreetEasy. In SoHo the median rent jumped 58 percent in the fourth quarter — from $3,800 to $6,002 — according to the site.

Behind the extreme hikes in rent is a rental market crunch driven in part by Covid expats flooding back, attracted once again to a revitalized city or recalled by office jobs. The vacancy rate in Manhattan was 1.3 percent in February 2022, down from the record high of 11.8 percent in February 2021, according to Miller Samuel Inc., a residential appraiser.

“New York City has always been cutthroat about real estate,” said Stephanie Diamond, the founder and C.E.O. of Listings Project, a newsletter featuring vetted real estate classifieds. Ms. Diamond said that in recent months the housing-wanted ads have poured in. The texts of these new ads, she noted, is increasingly pitched in desperation. “It’s never been fair, I don’t think ever, and now it is off the charts.”

The rents are higher, in part, because landlords know they can maximize their income by crowding many migrants into apartments that are usually rented to two Americans.

“For example, a two-bedroom apartment, it’s supposed to be for a family, maybe two [people per bedroom. But now, sometimes, it is five to six or seven in a two-bedroom apartment,” Walter Sinche, the executive director of the Alianza Ecuatoriana Internacional, or the Ecuadorian International Alliance, told Breitbart News in March.

The Times spoke to Marc Weber of Weber Realty Management, who said his company is capping rent renewal contracts at 10 percent. New rentals are going at market rates, he said.

“Landlords are trying to pay for their expenses, with inflation going on everything is getting more expensive,” Weber said. “But if a landlord is doubling the rent, that is greed.”

Matt Hutchinson, a spokesman for SpareRoom, a rental website, said in the Times report that the development is really to be expected.

“New York is New York,” Hutchinson said. “It’s one of those suitcase-and-a-dream cities, and I don’t think that’s ever going to change.”

0 5
Woman Gets $4.9 Million After Son Shot By Police; Now She’s Arrested For Allegedly Buying Guns For Other Son’s Gang

0 2
Media Criticize Republican Leaders For Skipping 1/6 Event. They Were At A Funeral.

0 2
Trump Tells His Supporters To Get The Coronavirus Vaccine: ‘It Is A Safe Vaccine’ 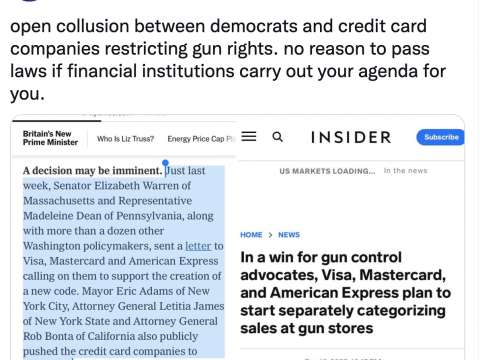