MSNBC anchor Chris Hayes said on Tuesday’s “All In” that the “basis behind” Florida’s Parental Rights in Education, deemed “Don’t Say Gay’ by its opponents, was a “loathsome” age-old smear against members of the LGBTQ community, claiming they are trying to prime children for sexual abuse.

Hayes said, “Vague allegations of grooming and age-old smears against members of LGBTQ community are trying to prime children for sexual abuse appears to be the case in Florida, and the basis behind the state’s so-called, ‘Don’t Say Gay Bill,’ which prohibits the discussion in class of sexual orientation or gender identity in classrooms for young children. Now some Republicans will try to lie and say that the bill is about parents’ rights or some other nonsense. But Republican Governor Ron DeSantis’ spokesperson gave out the whole game.”

He continued, “She wasn’t quite with it enough to keep it quiet. She said, ‘The bill the liberals inaccurately call, ‘Don’t Say Gay,’ would be more accurately described as an anti-grooming bill. If you are against the anti-grooming bill, you are probably a groomer, or at least you don’t denounce the grooming of 4 to 8-year-old children. Silence is complicit.’”

He added, “I want everyone to focus on what she is accusing people of here. She said it out loud. If you don’t agree with the bill, you are actively cultivating young children to sexually abuse them. Everything you don’t like is a work of these nefarious pedophiles who are trying to institutionalize systematic sexual molestation of children. If you’re a Democrat, you’re either pedophile or a pedophile sympathizer. If you’re a gay teacher who mentions, I don’t know, going away with your husband this weekend, you’re doing the same.”

Hayes concluded, “This is a disgusting and cynical attempt to render the political opposition essentially as hate-able as possible, irredeemable, like the worst thing you can be. It’s loathsome, and they know what they’re doing.” 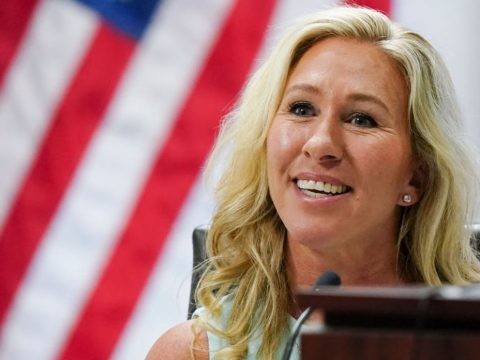