Senate Minority Leader Mitch McConnell (R-KY) has reportedly planned to release a biography to cement his career while some Republicans seek to end it.

Allowing the Associated Press and New York Times reporters to chronicle his rise to power throughout his 38-year Senate career, the title of his biography will be The Price of Power, echoing the biographies about Lyndon Johnson by Robert Caro, Axios reported.

The book will focus on “one of the most guarded and powerful actors in the nation’s capital … one of the most consequential political figures of this century,” or so the report dubbed McConnell. Excerpts of the book will reportedly include “extensive interviews with McConnell and access to his vast archive — his receipts.”

But as McConnell spends time touting his lengthy career, others are planning to end his tenure as GOP Senate leader. Senate candidate and former Missouri Gov. Eric Greitens, Alaskan Senate candidate Kelly Tshibaka, and Sen. Ron Johnson (R-WI) have all stated they will not support McConnell for the leadership position if Republicans retake control of the Senate after the midterms.

America First Republicans have been unhappy with McConnell for many of his policies. Under McConnell’s Senate leadership, the national debt has risen by nearly $20 billion, illegal immigration has continued, and real wages for American workers have not grown since the 1970s. Obamacare was enacted in 2010. Big banks were bailed out in 2008, and social media companies have silenced individuals without repercussions. In October, McConnell caved to Democrats’ demands and raised the debt ceiling, enabling Democrats to forward President Joe Biden’s “Build Back Better” agenda.

The movement to remove McConnell as leader reportedly includes Donald Trump urging Sen. Rick Scott (R-FL) to oppose McConnell, pending a November victory. Scott has not committed to opposing McConnell, instead reportedly suggesting he is focused on winning back the Senate.

“We have to focus on winning” the Senate back, Scott reportedly told Trump. “My only focus is on winning.”

Meanwhile, Scott has released an 11-point plan to implement if Republicans retake the Senate. Though the plan is roundly popular with voters, McConnell has shot down the plan as an affront to his leadership.

“I’ll decide in consultation with my members what to put on the floor,” he told Punchbowl News in March.

McConnell, perhaps threatened by Scott, has also taken heat from Senate Alabama candidate Mo Brooks, who has stated McConnell can expect significant resistance after the midterms. Brooks cited Sen. Lindsey Graham (R-SC) as being involved in the movement to oust self-dubbed “Cocaine Mitch.”

With Biden’s polling numbers below 40 percent, it is entirely possible Republicans may reclaim the Senate. Republicans only need to flip one seat while holding strong in several incumbency races. 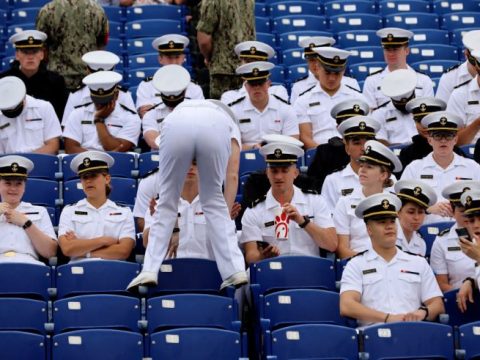