A Democrat running for Congress in Missouri has up to $1.25 million invested in a fund that poured hundreds of millions of dollars into state-owned Russian companies, including oil and gas giant Gazprom.

Democratic congressional hopeful Ben Samuels has between $600,000 and $1.25 million invested in Capital Group’s EuroPacific Growth Fund, his candidate financial disclosure shows. The fund has driven nearly $1.7 billion into Russian companies, many of which are state-owned.

Samuels’s financial holdings could prove to be a political liability in the Democrat’s bid to unseat Missouri Republican congresswoman Ann Wagner. The Treasury Department leveled sanctions on both Sberbank and Gazprom following Russia’s invasion of Ukraine in late February, a decision that aimed to “imperil Russia’s ability to raise capital key to its acts of aggression.” Prior to Russia’s invasion, Samuels made up to $65,000 in capital gains through his EuroPacific Growth Fund holding, according to his financial disclosure, which covers all of 2020 and most of 2021.

Samuels, who did not respond to a request for comment, has ties to Capital Group that go beyond his investments. The Democrat’s father, Ted Samuels, served as a global equity portfolio manager at the Los Angeles-based investment firm from 1990 to 2016, his bio states. Samuels has used the relationship to generate cash for his campaign. Capital Group employees have given the Democrat more than $240,000, according to OpenSecrets. Samuels’s campaign site touts his great-great grandfather’s status as a small business owner but does not mention his father’s role as a top investment firm executive.

In addition to Capital Group’s Russian holdings through its EuroPacific Growth Fund, the firm invested another $1.95 billion in Russian companies through its Capital World Growth and Income Fund. In total, Capital Group had $4.55 billion in exposure to Gazprom, Sberbank, and state-owned Russian mining company Alrosa as of Dec. 31, according to Reuters. Samuels holds roughly $8 million in investments through Capital Group, his financial disclosure shows. The holdings are split between a personal investment account and family trust.

Gazprom replaced the Soviet Ministry of Gas Industry in 1989, becoming the Soviet Union’s first state-run corporation in the process. Sberbank replaced Soviet Russia’s savings bank in 1991, when it was founded as Sberbank of Russia, a name it operated under until 2015. Both companies are majority-owned by the Russian government.

Born in Connecticut, Samuels spent much of his childhood in California. Prior to his run against Wagner, Samuels worked in the Chicago mayor’s office and served as an adviser to Massachusetts governor Charlie Baker (R.).

Samuels is not the only Democrat running to unseat Wagner—before facing the Republican in November, he will have to defeat primary opponent and state legislator Trish Gunby. Samuels has raised $871,000 to Gunby’s $228,000. Wagner, meanwhile, has raised $2.5 million and has $1.5 million on hand. 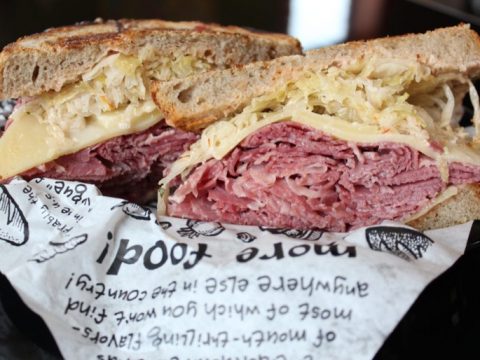