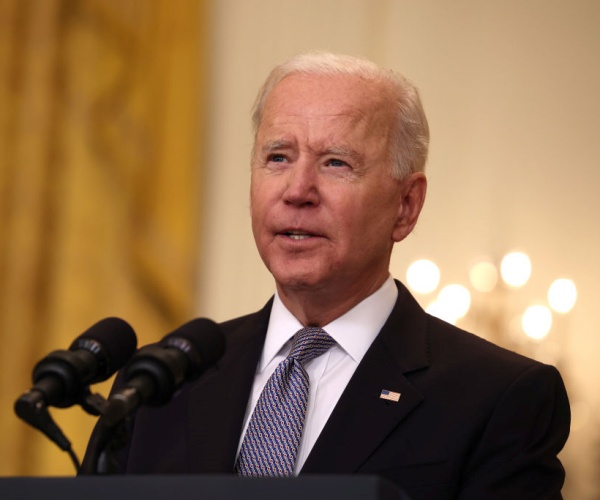 President Joe Biden on Tuesday plans to announce steps to increase the number of federal contracts awarded to small, disadvantaged businesses, one of several measures designed to address a racial-wealth gap.

Biden aims to increase spending with those businesses by 50%, or an additional $100 billion in contracts over five years, according to an administration official who spoke on condition of anonymity. Many businesses classified as small and disadvantaged are owned by people of color.

Biden will discuss the new programs — which also include a home-appraisal initiative — during a Tuesday visit to Tulsa, Oklahoma, to mark the 100-year anniversary of a race massacre that wiped out one of the nation’s most prosperous Black neighborhoods.

Biden has made racial equity among the centerpieces of his presidency. Last week, Biden reiterated calls for Congress to overhaul policing as he met with the family of George Floyd, the unarmed Black man who was killed last year at the hands of a White Minneapolis police officer. Black voters helped propel Biden to victory in November’s election against Donald Trump.

The federal contracting changes will help reduce U.S. wealth inequality, the official said, which has left White people more prosperous than people of color. The U.S. government is the largest consumer of goods, but only about 10% of federal agency dollars go to small, disadvantaged businesses, the official said.

The president also is set to announce rules that target housing discrimination. Minorities lag behind White people in home ownership, which is considered to be a primary means of building and transferring wealth.

Biden also will instruct Housing and Urban Development Secretary Marcia Fudge to lead an interagency initiative to address inequity in home appraisals. Black-owned homes are routinely appraised at lower values than similar ones in White neighborhoods.

On Monday, Biden issued a proclamation recognizing the Tulsa massacre, which erupted 100 years ago on May 31 and June 1, when a White mob destroyed Tulsa’s Greenwood district, known as “Black Wall Street” for its abundance of Black-owned businesses. An unknown number of people were killed, with estimates ranging from 50 to 300.

Biden’s proclamation blamed the federal government for being an impediment in attempts to rebuild the Greenwood district.

“The destruction caused by the mob was followed by laws and policies that made recovery nearly impossible,” according to the proclamation. “In the aftermath of the attack, local ordinances were passed requiring new construction standards that were prohibitively expensive, meaning many Black families could not rebuild.”

It went on to say that the city’s Black residents, like many across the U.S., experienced redlining that prevented them from using homeownership to build wealth. The proclamation also discussed the ways that the federal highway system furthered segregation.

In Tulsa on Tuesday, Biden will also call for passage of his infrastructure proposal, saying it would provide a $10 billion fund that communities such as Greenwood could tap for revitalization, an official said. Another element of the plan would retrofit transportation infrastructure to reconnect neighborhoods that had been divided by highways.

0 411
Pelosi downplays border crisis, says Biden has it under control

0 101
The 3 Stories The Legacy Media Ignored This Week