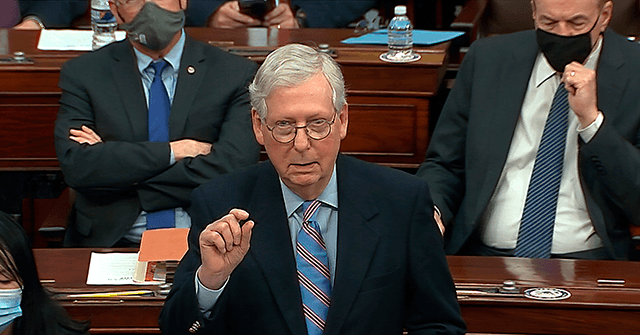 GOP’s Senate leader, Sen. Mitch McConnell, slammed the administration’s leaked offer of $450,000 in reparations to individual illegal migrants who claim to have been separated from their children or parents.

He said in a November 1 speech on the Senate floor:

Here’s what the Biden administration is focused on: Handing out six-figure and seven-figure payments to illegal immigrants …

This absurd idea feels like a satirical policy proposal that Republicans would have been invented to make a parody out of the radical left. “Oh, and the next thing you know, they’ll be sending out million dollar checks to illegal immigrants!” But this is literally what the Biden administration wants to do, according to reports that they have not denied.

“President Biden wants to literally make millionaires out of people who violated federal law. What could be more unfair and unjust?” he added.

The proposed gift is also an insult to Americans, McConnell added:

Even during a time of calm and prosperity, writing million-dollar checks to illegal immigrants would be an insult to American families. But it’s ten times more insulting at a time like this when Democrats policies are forcing so many households to tighten their belts.

President Biden’s policies have already brought us record-high illegal border crossings and decade-low ICE enforcement. And now Democrats will not deny reports they want to send millions of dollars to illegal immigrants in legal settlements. pic.twitter.com/0gQyRr26uh

The payouts would be larger than the compensation to the families of dead U.S. service members, he said:

Democrats are already trying to send monthly welfare payments to people here illegally. That’s in the reckless, taxing and spending spree they are putting together behind closed doors. But who needs $300 a month when President Biden wants to send these folks $450,000 per person. That is four and a half times the payment that the Department of Defense sends to survivors of service members who were killed in action.

He also argued that the Democrats’ loose border policies are cruel:

The left mistakenly thinks that a compassionate border means a weak border. They think compassion requires weakness. Weak security, weak enforcement, weak on upholding the rule of law. And now apparently we’re a cruel country unless we hand out a million dollars per family to illegal immigrants who sue America. But the entire concept is dead wrong. It is not compassion to lure people from all over the world through dangerous journeys with the promise of open borders socialism. In fact, the government paying out six figure sums that multiply with every additional child in tow will only incentivize the riskiest and most dangerous kinds of illegal immigration. We will be guaranteeing that even more children are dragged along the dangerous journey.

McConnell then slammed the impact of Biden’s economic policies on American families:

American families already have enough reasons to worry about the administration spending habits. The inflation kicked off by Democrats springtime binge have wiped out wage gains and made family budgets even harder to square … Feeding a family is getting harder. Filling up the tank is getting harder. Even heating a home this winter is shaping up to be 30 percent more expensive than last year.

For many years, the donor-funded GOP leaders, including McConnell — plus their deputies and staffs — have downplayed the pocketbook impact of migration on Americans’ communities.

One reason for this policy is to avoid angering donors who do not want the party to make any pro-employee campaign promises on immigration. Instead, the GOP leaders try to spin up the turnout of its base voters by spotlighting the non-economic aspects of the migration problem, including crime by migrants, border chaos, and drug smuggling.

For many years, a wide variety of pollsters have shown deep and broad opposition to labor migration and the inflow of temporary contract workers into jobs sought by young U.S. graduates. This opposition is multiracial, cross-sex, non-racist, class-based, bipartisan, rational, persistent, and recognizes the solidarity Americans owe to each other.

0 5
Sen. McConnell: Bipartisanship is Over 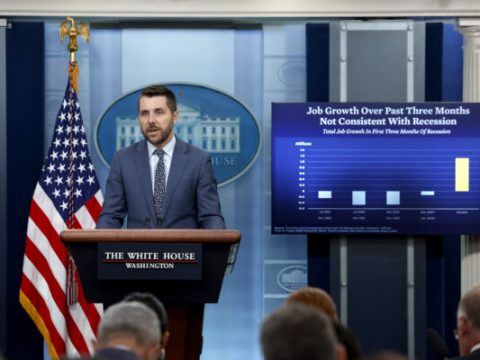 0 19
Duh: Most Business Economists Say U.S. Already in Recession or May Be Soon

0 5
Rep. Khanna Says Russia Can Get Around Sanctions If China Doesn’t Sanction Them Too