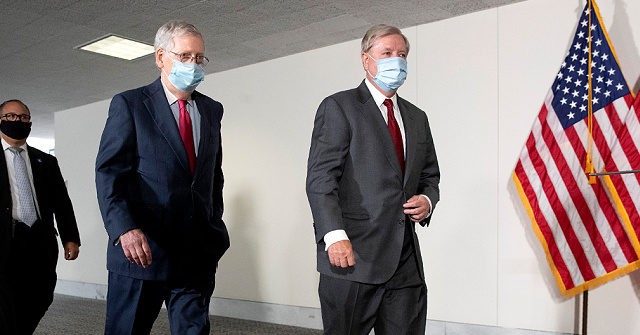 In an interview with Fox News’s Sean Hannity, Graham declared that any future Republican congressional leader must “have a working relationship with President Donald Trump.”

“He’s the most consequential Republican since Ronald Reagan. It’s his nomination if he wants it, and I think he’ll get reelected in 2024,” Graham said of former President Donald Trump.

Lindsey Graham noncommittal on supporting McConnell. “I’m not gonna vote for anybody for leader of the Senate as a Republican unless they can prove to me that they can advocate an America first agenda and have a working relationship with President Trump.”pic.twitter.com/QBIPwv1GFy

Graham then emphasized that his support of McConnell would be conditioned on his “working relationship” with Trump:

I like Sen. McConnell. He worked well with President Trump to get a bunch of judges, including three supreme court justices on the bench. They got the tax cuts passed working together. But here’s the question: can Sen. McConnell effectively work with the leader of the Republican Party, Donald Trump?

I’m not gonna vote for anybody that can’t have a working relationship with President Trump, to be a team, to come up with an America First agenda, to show the difference between us and liberal Democrats, prosecute the case for Trump policies.

And I’m not gonna vote for anybody for leader of the Senate as a Republican unless they can prove to me that they can advocate an America First agenda and have a working relationship with President Trump because if you can’t do that, you will fail.

Graham is not the only Republican that has concerns about McConnell’s effectiveness as a Republican leader.

Tshibaka, the Trump-endorsed candidate running against establishment incumbent Sen. Lisa Murkowski (R-AK), declared she “will not support Mitch McConnell as leader” once elected to the Senate. “Mitch McConnell has repeatedly bailed out [President] Joe Biden, giving him gifts of Senate votes, which are the only things keeping the Biden administration on life support,” she said.

All copyrights and legal uses attributed to content are located at the article origination: © Breitbart, Lindsey Graham Will Not Support McConnell as Leader Unless He ‘Can Prove’ a ‘Working Relationship’ with Trump