Kentucky Democratic Gov. Andy Beshear struggled to hold back his emotions on Monday as he updated the media regarding recovery efforts in his state following devastating tornadoes over the weekend.

“Like the folks in Western Kentucky, I’m not doing so well today,” Beshear said. “And I’m not sure how many of us are.”

WATCH: Governor @AndyBeshearKY gets emotional while trying to provide residents with an update about the state’s recovery efforts following tornadoes over the weekend.

Beshear also shared an emotional story regarding his notes for the media update.

“I was working on getting the confirmed deaths this morning and realized I was writing on the back of notes that one of my kids took from school. And here’s what it is. It’s notes on inertia. It means that an object that’s in motion will stay in motion. So we’re going to keep putting one foot in front of the other and push through this,” he said.

The governor also encouraged residents to get the help they need, promising “we’re going to be with you.”

Beshear focused on the unity of Kentucky’s people, encouraging them that others are “standing with you.”

“This is one state. People that love one another. I think everyone in Kentucky, but also everybody in the country, is standing with you,” he said.

Beshear said there were “64 confirmed deaths across the state as of Monday morning, following the string of deadly tornadoes that hit Kentucky and several other states over the weekend,” according to The Washington Post.

At least 105 people remained unaccounted for as of Monday morning, the report also noted.

“Six are younger than 18,” he said during the media update. Of the 64 confirmed deaths, 18 were unidentified.

On Saturday, Beshear posted that a state of emergency had been declared following widespread tornado damage.

We are praying for our Western Kentucky families. 2/2

Tapper initially asked about the mounting death toll, which Beshear said currently stands at “over 80,” but could climb to “more than 100.” 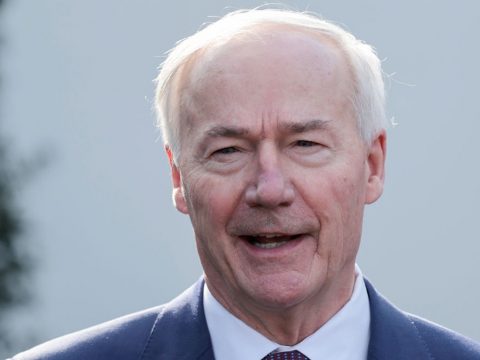 0 262
GOP Arkansas Gov. Hutchinson: Uvalde Shooting Not About AR-15, But About School Security, ‘The Human Heart’

0 5
Gavin Newsom: I Skipped Climate Summit Because My Kids ‘Had An Intervention’ For Me About Halloween