The Kansas primaries on Aug. 2 will include Democratic and Republican inter-party preliminaries to select their gubernatorial candidates for fall’s general elections.

Both face nominal opponents in slam-dunk Aug. 2 primaries, have millions to spend and are already lobbing broadsides at each other in long-plotted campaigns that will only intensify as November nears.

The anticipated Kelly-Schmidt race is one of 36 gubernatorial elections nationwide this fall. Kelly is among 22 Democratic governors seeking re-election but the only one doing so in a state that former president Donald Trump won in 2020, garnering 56 percent of the vote.

Kansas attorney general Derek Schmidt, who is running for governor in November’s election, greets voters at the Sedgwick County Fair in Cheney, Kansas, on July 20. (Courtesy of Schmidt for Kansas)

In addition to the governor, Kansans will also vote in primaries for lieutenant governor, attorney general, secretary of state, treasurer, insurance commissioner, in one GOP congressional district, and for five seats on the State Board of Education.

The inter-party contests seeking November nods are, however, sideshows on the Kansas Aug. 2 ballot, which is dominated by the proposed “Value Them Both” amendment.

If the ballot measure is approved in a vote being watched closely nationwide—the first such referendum of the “post-Roe era”—the Kansas Constitution would no longer guarantee access to abortion as a right.

Early voting in the primaries and on the “Value Them Both” amendment began July 13 and concludes Aug. 1. The polls are open 7 a.m. to 7 p.m. on Election Day, Aug. 2.

In Kansas’ “semi-open” primary system, unaffiliated voters can participate in the partisan primary of their choice 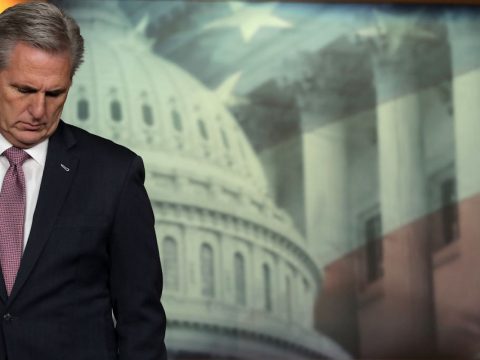 0 72
‘Only Kevin’ Vs. ‘Never Kevin.’ Opposing Groups Face Off Over McCarthy Speaker Bid.