Vice President Kamala Harris traveled to Florida for the scheduled Artemis I launch and said that the space program will benefit “all mankind and womankind.”

Harris, who serves as chair of the National Space Council, made the comments on Sunday after arriving at the Orlando International Airport with the second gentleman, Doug Emhoff.

KAMALA HARRIS: The space program “is going to benefit all mankind and womankind.” pic.twitter.com/WfxkUuooLV

“The Artemis program is the beginning of the next era of what we have a history and a tradition of doing, of providing vision and inspiring innovation in a way that is going to benefit all mankind and womankind. And so I’m very excited to be here. Looking forward to tomorrow,” Harris said.

The Artemis I launched was delayed on Monday morning following both thunderstorms and a fuel leak that could not be addressed during the launch window, The Daily Wire reported. The launch has been rescheduled for Friday.

As The Daily Wire previously reported, the Artemis mission from NASA plans to land the first woman and the first person of color on the Moon. The space program intends to “collaborate with commercial and international partners and establish the first long-term presence on the Moon.” The unmanned flight is part of the preparations for the next human mission to the Moon, which is expected in 2025.

The vice president has previously been criticized over her views on gender. Last month, Harris introduced herself with her preferred pronouns during a roundtable discussion with disability rights leaders on the anniversary of the signing of the Americans with Disabilities Act.

“Good afternoon. I want to welcome these leaders for coming in to have this very important discussion about some of the most pressing issues of our time,” Harris began. “I am Kamala Harris. My pronouns are ‘she’ and ‘her,’ and I’m a woman sitting at the table wearing a blue suit.”

“I am Kamala Harris, my pronouns are she and her, and I am a woman sitting at the table wearing a blue suit.” pic.twitter.com/kz7tx712wK

Harris was also blasted in March for pushing the Equality Act shortly after Russia invaded Ukraine.

“Let’s send the Equality Act to President Biden’s desk,” she tweeted. “We must increase protections for LGBTQ+ Americans across the country. The onslaught of state bills targeting transgender Americans and their families is wrong.”

Rep. Dan Crenshaw (R-TX) was among those who responded to the message, condemning the vice president’s failure to focus on key issues. Despite “a ground war in Europe” and inflation in the U.S., he trolled Harris over her emphasis on getting “men in women’s sports asap.”

America: inflation is screwing us, our border is lawless, and there’s a ground war in Europe.

Kamala: we need to get men in women’s sports asap https://t.co/NEbWhnoPpU

Harris was also widely ridiculed online following a July CNN interview with Dana Bash that included a variety of odd remarks, including one referring to herself as a woman. 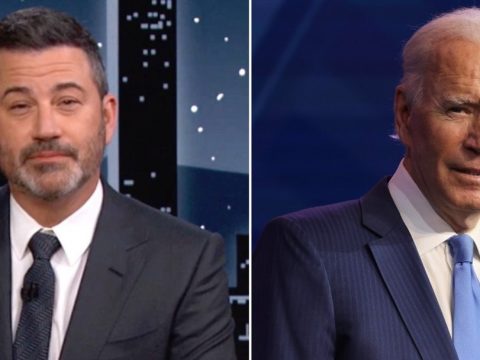