In one case, the plaintiffs, which included Black Lives Matter, alleged Trump and Attorney General William Bar ordered “the use of violence against peaceful demonstrators.” Trump had entered the Lafayette Square area after it had been cleared and took a photo at St. John’s Church. 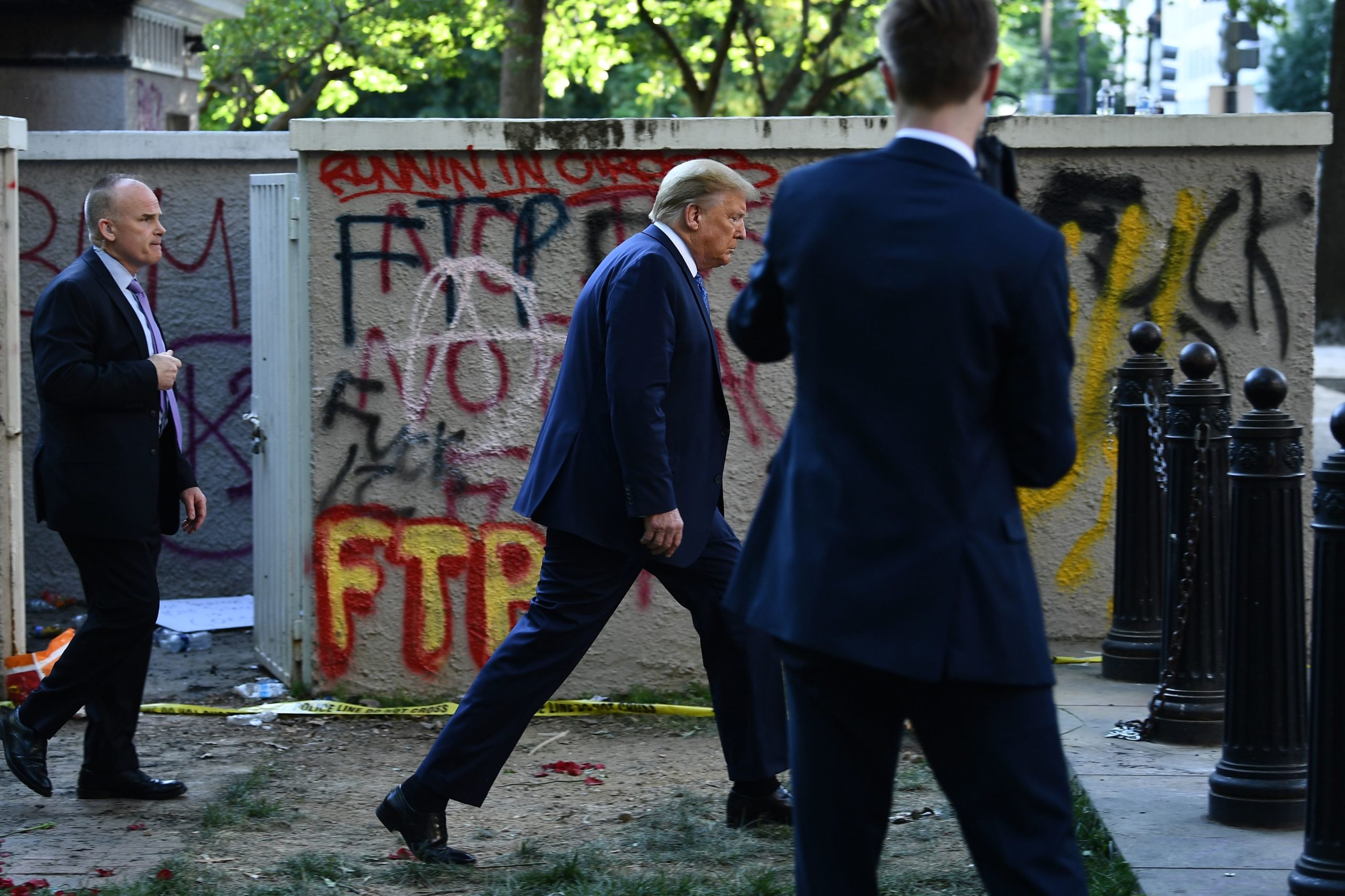 US President Donald Trump walks back to the White House escorted by the Secret Service after appearing outside of St John’s Episcopal church across Lafayette Park in Washington, DC on June 1, 2020. -(BRENDAN SMIALOWSKI/AFP via Getty Images)

“[Plaintiffs] demonstrate only that these officials were communicating with each other on June 1, prior to and after the clearing of Lafayette Square,” Friedrich wrote. “Merely alleging that the defendant officials communicated, without alleging any details of those communications that suggest an unlawful agreement, cannot justify inferring the requisite agreement for a … conspiracy.”

Friedrich also said the plaintiffs could not sue for money under a so-called ‘Bivens Remedy’ because they were unable to prove allegations that Barr and other officials violated plaintiffs’ First, Fourth and Fifth Amendment rights.

“First, national security – specifically, the country’s national-security interest in the safety and security of the President and the area surrounding the White House – strongly weighs against creating a Bivens remedy here.”

A ‘Bivens Remedy‘ allows plaintiffs to sue for monetary damages if a federal officer violates the Constitution.

The D.C., American Civil Liberties Union (ACLU) criticized the decision in a statement.

“Today’s ruling essentially gives the federal government a green light to use violence, including lethal force against demonstrators, as long as federal officials claim to be protecting national security,” Legal Director of the D.C., ACLU Scott Michelman said.

“Under today’s decision, Lafayette Square is now a Constitution-free zone when it comes to the actions of federal officials. Not only is this decision a stunning rejection of our constitutional values and protestors’ First Amendment rights, but it effectively places federal officials above the law,” he continued.

“As alleged, the defendants prohibited all expressive activities in Lafayette Square without any basis at all; they left open no alternative channels; and they forcibly dispersed protestors because of the plaintiffs’ exercise of their protected First Amendment rights. Reasonable officers would have known that such alleged actions violated clearly established law.”

Interior Department Inspector General Mark Greenblatt issued a report finding Park Police were given the green light to clear protesters from the park prior to anyone knowing Trump was going to walk over to the church. The park was cleared so anti-scale fencing could be installed following riots, Greenblatt wrote, according to NBC News. (RELATED: Legacy Media Suffers A Hit As Yet Another Trump Conspiracy Theory Evaporates)

“We determined that the evidence did not support a finding that the (Park Police) cleared the park on June 1, 2020, so that then President Trump could enter the park.”

Greenblatt did note there was miscommunication among officials in terms of clearing the park, claiming Barr pushed for the clearing to be sped up after he learned of Trump’s plans to walk to St. Johns Church.

All copyrights and legal uses attributed to content are located at the article origination: © Daily Caller, Judge Tosses Most Cases Against Trump For Clearing Of Lafayette Park