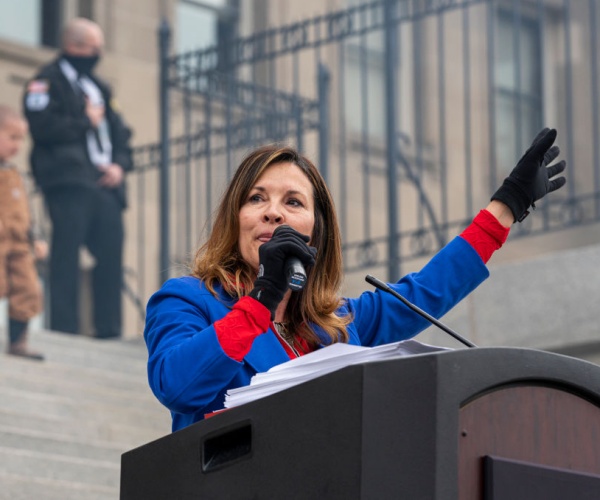 Idaho GOP Lt. Gov. Janice McGeachin told Newsmax on Friday that she was attempting to protect ”individual liberties and rights” when she issued an executive order banning local governments from issuing mask mandates while briefly acting as governor.

Earlier on Friday, GOP Gov. Brad Little rescinded the order, which McGeachin issued on Thursday while serving as acting governor while Little was outside the state to speak at the Republican Governors Association, saying that it was ”an irresponsible, self-serving political stunt” and an ”abuse of power.”

McGeachin told ”American Agenda” that ”what happened was that over the course of this past year, thousands of thousands of Idahoans have been struggling with some of the orders that the governor has imposed on us as free citizens in the state. And as our state has recovered, and we, like, like all states across the nation, are recovering from the virus, that there’s a herd immunity is being developed.

“The vaccine is readily available in Idaho. You want a vaccine? You can get it. But there are still some restrictions that were placed on cities, counties, and especially the school district, which is very problematic to me, especially when I see that the governor goes around to public political events and does not wear masks.”

She said, ”But yet at the same time our kids at school are being mandated to wear masks. So, last week when I was on the steps of the Capitol, making my announcement that I was going to run for governor, a small child came up to me and looked up at me and said, ‘If you were the governor, then would you force me to wear masks to school?’ And I looked at the child, I said, ‘No, I would not.’ And that really tugged at my heartstrings as a mother and as a person who’s committed to protecting our individual liberties and rights.”

McGeachin added, ”I decided when I learned that the governor was going to be out of town that I would prevent this from occurring on the local level, and that’s what my action did yesterday was prevent the localities, including our school district, from placing that mandate on people. Because I do not believe at any local government or any level of government should force individuals to make decisions on their own individual healthcare. So, that’s what my action did was prevented the mask mandate.”

0 1869
BREAKING EXCLUSIVE: Ron Raffensperger, the Brother of Georgia Secretary of State, Brad Raffensperger, Works for Huawei in China – How Close Are They to the China Government?