An ABC News/Ipsos poll from early August found only 37% of Americans approve of President Joe Biden’s handling of the economy, Karl explained to Jean-Pierre, and asked her why, if things are getting better with inflation, so many Americans disapprove of the president. Jean-Pierre argued that the White House is aware of what the American people are feeling. She then gave examples of how the president has “partly” helped in attempting to improve inflation issues, noting the introduction of the Inflation Reduction Act.

“Let me ask you. It’s called the ‘Inflation Reduction Act,’ but the Congressional Budget Office [CBO], which is nonpartisan, said there would be a negligible impact on inflation this year and barely impact inflation at all next year,” Karl responded, “Isn’t it almost Orwellian? How can you call it the ‘Inflation Reduction Act’ when nonpartisan experts say its not gonna —”

On Inflation Reduction Act, Jean-Pierre tells @JonKarl: “It’s going to lower costs for Americans. Prescription drugs, energy costs…13 million Americans on the ACA who are now going to continue to see their premiums go down. That is important.” https://t.co/s4vGyjQKTX pic.twitter.com/zuJREOUiXe

Jean-Pierre cut Karl off before he could finish the question, saying that, “I appreciate the question. We’ve actually addressed this.. this … in the CBO … it was the top line number that shows, uh, that it will have the money from — remember how we’re doing this too, it’s making sure that billionaires in corporate America are paying their fare share.”

“Making sure that the tax code, is a little bit more fairer,” she continued, “so when you do that, when you put it in its totality, you will she — see — that it will, it will bring down, lower, the deficit, which will help fight inflation.” (RELATED: New WH Press Secretary Appears In Photo Wearing (Knock Off?) Ivanka Trump Dress)

Karl asked if that meant Jean-Pierre disagreed with the statements made by the CBO, but she continued talking over him so his question was lost in the segment. Analysis by other bodies, such as the University of Pennsylvania Penn Wharton Budget Model, have also  found that the act will have no measurable effect on inflation. 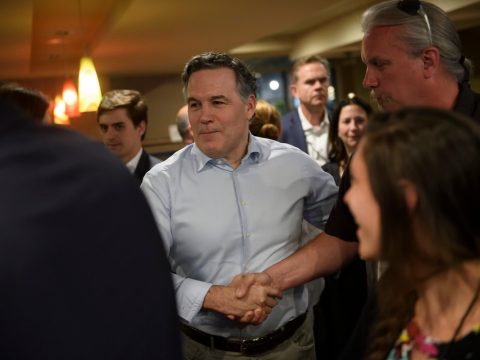 0 76
TOO CLOSE TO CALL: Pennsylvania GOP Primary Race Still Up In The Air, Recount Expected

0 7
In Latest Sign of Recession, US Manufacturing Growth Plummets to Two-Year Low

0 7
Why Is Media Hiding That Illinois Has More COVID Cases Than Florida?