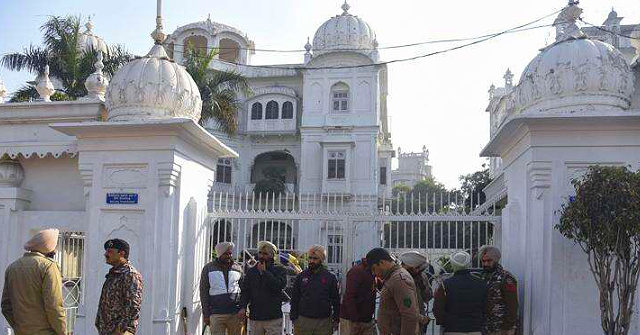 A mob of Sikhs beat a man to death on Saturday inside the historic Golden Temple — one of the most revered shrines in Sikhism — in Amritsar, India, after the man allegedly attempted to commit a sacrilegious act by intruding into the shrine’s inner sanctum and handling holy objects, including a jewel-encrusted sword, the Hindustan Times reported Tuesday.

CCTV cameras inside the temple captured the man crossing a barricade separating praying Sikhs from the shrine’s holiest section. Saturday’s evening prayers were broadcast live on local television, meaning many Sikh devotees outside the temple and surrounding it were witness to the seemingly sacrilegious act.

An unidentified man believed to be in his early 20s “stepped inside the central enclosure of the sanctum sanctorum where the [Sikh] holy book Guru Granth Sahib is placed [and] picked up a diamond-encrusted sword,” local police told the Hindustan Times on December 19 after reviewing the video footage.

“[T]he man could be seen … approaching the priest who was reciting evening prayers,” the newspaper detailed on December 21.

A mass of Sikh pilgrims witnessing the incident inside the temple interpreted the act as attempted sacrilege. They moved to surround the suspect as employees of the Golden Temple apprehended the individual moments after his intrusion.

“As the man’s act was telecast on live television during the broadcast of evening prayers at the shrine, word spread fast and angry pilgrims grabbed him even as he was being taken away by employees of the SGPC … and beat him to death before police arrived,” Golden Temple officials told the Hindustan Times.

The SGPC, or the Shiromani Gurdwara Parbandhak Committee, is an organization responsible for the management of gurdwaras, or Sikh places of worship, in the Indian states of Punjab, Haryana, and Himachal Pradesh. Amritsar is a city in northwestern India’s Punjab state.

“The man, about 20 to 25 years of age, had a yellow cloth tied on his head and jumped the fence … the people inside held him and escorted him out to the corridor where there was a violent altercation and he died,” Parminder Singh Bhandal, deputy commissioner of Amritsar police, told New Delhi Television (NDTV) on December 19.

The Punjab state government formed a special investigation team (SIT) on December 19 to probe the alleged sacrilege attempt at the revered Sikh temple. The SIT announced on December 21 it had already registered an initial police report “on the sacrilege bid under section 295-A (outraging religious sentiments) and 307 (attempt to murder) of the Indian Penal Code” despite not having charged any of the men accused of beating the suspect to death with attempted murder so far.

The “attempt to murder” charge against the accused suspect, now deceased, seems to refer to his alleged attempt to physically attack the Sikh priest leading Saturday evening prayers at the Golden Temple on December 18.

“[M]urder proceedings against the killers of the accused man will be done only after [the suspect’s] autopsy reports,” Punjab’s SIT told the Hindustan Times on December 21.

“Our investigation is going on. After the investigation, we will also consider the post mortem report. After going through both, we will carry out the pending legal proceedings required in this case,” Amritsar deputy police commissioner Parminder Singh Bhandal, who is heading Punjab’s SIT, told the Hindustan Times on Tuesday.

0 24
GOP Rep. Gallagher to MSNBC: 'Failure' of Current Russia, Energy Policies Are the Issue, Not People Who Left Office a Year Ago