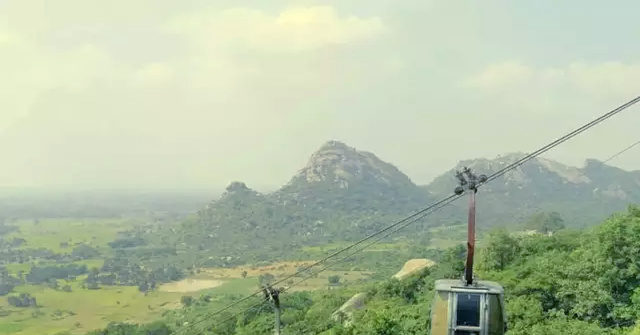 A cable-car accident in eastern India’s Jharkhand state on Sunday — which left dozens of frightened passengers hanging mid-air for 40 consecutive hours — turned deadly after two people fell to their deaths during subsequent helicopter rescue missions and a third person died from injuries sustained inside one of the carriages, the Indian Express reported Thursday.

Roughly 60 people were traveling in cable cars along the Trikut Ropeway, reportedly India’s highest, in Jharkhand on April 10 when an unspecified malfunction caused the transit system to stop functioning, resulting in three of the carriages crashing into each other. At least 15 of the ropeway’s passengers remained trapped inside the affected carriages from April 10 through April 12 following the collision.

“Three people have died in the mishap, including two tourists who fell from helicopters on Monday [April 11] and Tuesday [April 12] during rescue attempts, while 12 injured people are undergoing treatment at hospitals,” local government officials told Indian media on April 12, as quoted by New Delhi Television (NDTV).

The Indian Express detailed the botched helicopter rescues on April 13, writing, “a 60-year-old woman fell to her death as she was being winched up to one of the two IAF [Indian Air Force] helicopters on duty — the second such fatality during the rescue.”

“Of the two other victims, another woman had succumbed to injuries sustained inside a cable car on Sunday while a 40-year-old man fell to death while being hauled up to a helicopter on Monday,” according to the newspaper.

Two IAF helicopters flew “28 sorties over 26 hours” in the Trikut hills, a regional tourist destination, as part of the rescue mission. The IAF posted a statement to its official Twitter page on April 12 confirming two deaths occurred during their rescue attempts, writing, “35 passengers from 10 cable cars were evacuated in this extremely challenging operation. IAF deeply regrets the loss of two lives during the rescue missions.”

The accident’s third casualty, a woman identified as Shobha Devi, 60, died later on April 12 from wounds sustained during the cable car collision.

Jharkhand Tourism director Rahul Sinha told Indian media on April 13 the ropeway’s metal cable “had come out of its shaft” on the evening of April 10, “which led to 24 cable cars getting stalled midway.”

The manager and other employees of the Trikut Ropeway allegedly “fled” the scene immediately after the incident on April 10, according to the Press Trust of India (PTI). If true, the actions could be tied to the Indian Express‘s revelation on April 13 that the Trikut Ropeway’s regular inspection on March 17 warned operators of the line to monitor its main cable as it was at apparent risk of malfunction.

“[A] government-backed agency had conducted a safety audit about three weeks ago of the 1,770m-long steel rope used to haul the cable cars — and reported that its condition was ‘satisfactory,’” the newspaper relayed.

“The audit report pointed to ’24 local flaws/initiation of flaws’ and recommended that a ‘close visual watch’ be kept on the rope and its joints or the ‘splicing portions’. But crucially, it emphasised that the probe ‘does not include’ the aspect of ‘fatigue’ that may have developed over time on the haulage rope, which was installed in 2014,” the Indian Express noted.

“The report recommended that the rope should be kept clean and protected from corrosion. ‘Special attention may be given…as the rope is more than seven years old. If any abnormality is noticed, rope may be replaced immediately,’” the report read.